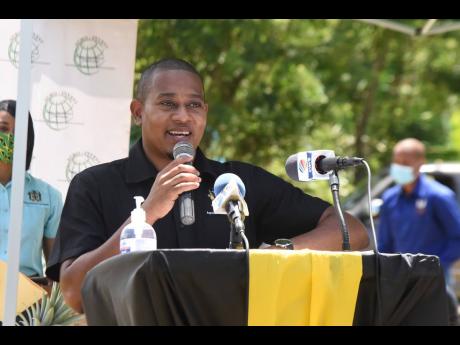 AS PROMISED, Agriculture Minister Floyd Green on Tuesday launched the J$50 million Small Ruminant Development Programme (SRDP), which is designed to rapidly increase the population of small ruminants, and over time, improve the nation’s food security.

At the launch, which took place at the Hounslow Research Station, in St Elizabeth, on Tuesday, Green said he was very pleased that he was able to fulfil the commitment that he made in his Sectoral Debate presentation in Parliament earlier this year, especially since the launch was taking place in the parish of his birth and in his own St Elizabeth South West constituency.

According to Green, the project marks the dawn of tangible steps being taken towards increasing the country’s supply of regular goat meat and chevron meat to satisfy local demand, which now stands at over J$1 million kilogrammes.

“Over the last five or so years, Jamaica has imported over US$1 billion worth of chevron, goat meat, into our country, US$1 billion,” said Green. “In fact, I did some checks, and when you look at the price of lamb on the local market, lamb retails for about J$10,000 per kilogramme.”

A NEED TO IMPROVE LOCAL MARKET

According to Green, based on the high level of the import bill for goat meat, it should be clear that there is an urgent need to start improving the local goat stock so as to reduce the import bill.

“I do not need to convince you about the significant demand, and we know, based on our palate, we much rather fresh meat than those that come in from abroad, but unfortunately, over the years, we have not been able to really drive the supply to fit our demand. We have to do this, and this is what this project is about,” said Green.

According to Green, it is critical that Jamaica moves with alacrity to drive the production of goat and chevron, and as such, the small ruminant industry is getting much-renewed focus and emphasis based upon the work that has been put in by the relevant institutions over the years.

Green further noted that a total of over 6,000 registered small ruminant farmer would be targeted in the $50 million programme.