Hansle's post of gratitude... How the hurdles hero almost missed his race 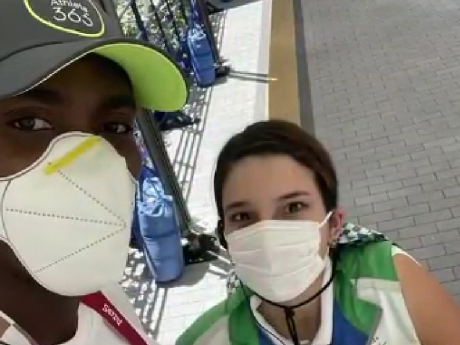 It's the story told only by the athlete himself: How Jamaica's hurdles hero Hansle Parchment went searching for the Japanese 'Samaritan' who may have played the biggest role in his Olympic glory.

Parchment has been melting hearts since this morning with his social media post of gratitude detailing how a volunteer helped him after he ended up at the wrong venue.

#TokyoGoldRush: It was only destiny. After taking the wrong bus ahead of his semi-final, Hansle Parchment ran into a kind Olympic volunteer who set him on the right way. He's gone back to find her and share the Jamaican gratitude.

On Tuesday, Parchment had boarded a bus that was heading to an aquatic field instead of the Olympic Stadium where he was due to compete in the semifinal of the men's 110m hurdles.

By now, time was far spent.

A return to the terminus via another bus would mean he would have missed the semis.

That's when he begged for help and an Olympic volunteer broke protocol and gave him money to take a taxi to the venue.

Parchment did not have the best of starts in that semi-final but recovered to finish second in 13.23s, behind world leader Grant Holloway of the USA, who won in 13.13 seconds.

Two days later, the St Thomas native flipped the script, powering to a golden finish in 13.04 seconds ahead of Holloway.

"I'm going to find her this morning and show her my gold medal that I was able to get because she helped," Parchment said as he headed to the venue.

The bus ride over, and Parchment was now standing behind her.

"You remember me?" he asked as the volunteer as he called out to her.

"Oh yea! Thank you, thank you," she replied even before she got the chance to hold his precious metal.

Parchment then presented her with one of his Jamaican shirts.

Still surprised, she asked, "Is this me?" as she snapped photos of the medal.

Parchment also returned the money the volunteer had given him to pay his fare on a taxi.

The video ends with a selfie of Parchment and the volunteer.

It has been triggering immense reactions across social media with Parchment's Instagram handle flooded with emotional responses.