Insists it will continue drive to rid Britain of criminals, illegal immigrants 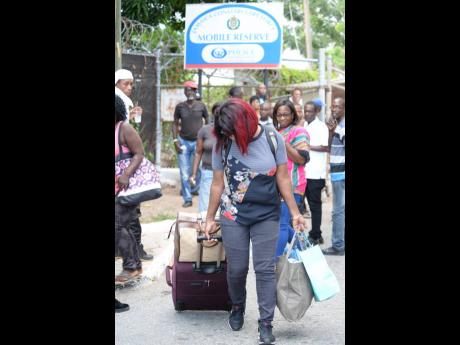 Jermaine Barnaby
Jamaicans deported from UK leaving the Mobile Reserve Police Station in Kingston after arriving on a flight on Wednesday, March 8, 2017.

Amid heightened concern for a planned “summer of mass deportations” of Caribbean immigrants, especially Jamaicans, the British Home Office has avoided confirmation of the disruptive exercise, saying instead that it will continue efforts to remove those who have no right to be in the country.

When contacted by The Gleaner, a Home Office spokesperson said: “We make no apology for seeking to remove those with no right to remain in the UK and dangerous foreign criminals. That is why we regularly operate charter flights to different countries - to remove dangerous criminals and those who have no right to be in the country but refuse to leave voluntarily.”

The spokesperson continued: “Our new Nationality and Borders Bill will create an immigration system that is fair but firm, welcoming those in genuine need but cracking down on those who come to the UK illegally. Our priority will always be to keep our communities safe and, since January 2019, we have removed 7,985 foreign criminals.

This is the closest the Home Office has come to admitting to the deportations since news broke two weeks ago of the Government’s plans to operate chartered flights to facilitate the removal of immigrants. Media reports say that one of those flights is set to depart for Jamaica on August 11.

Barac UK, a grassroots human rights activist group, and the National Windrush Organisation have since posted blogs on their websites about the plans being made for the flights.

Barac UK, which has labelled the deportations as racist, has also launched an online petition on Change.org, titled ‘Take action against the Home Office summer of racist mass deportations’. It has set a target of 200,000 signatures, which had garnered close to 190,000 respondents within a few days.

According to Zita Holbourne, co-founder of Black Activists Rising Against Cuts (Barac UK), “These deportations are racist in nature because many of the people being targeted are from the black and Asian communities and part of the continuing hostile environment policy. We must not forget that, when they are deporting someone with Caribbean origin, these will be the descendants of the Windrush generation whose grandparents or parents were initially invited to live and work in the UK.

“The Home Office say they are targeting foreign national criminals but, in reality, some might have come to the UK as children and spent most of their life here than they did in the Caribbean, which they don’t know anymore. They are a product of British society and the criminal justice system disproportionality impacts these people because it is institutionally racist.

“Black and brown people are more likely to get harsher custodial sentences than their white counterparts. As we have seen from previous deportations, many were sent back after committing low-level offences,” Holbourne concluded.

As a result, the Barac UK head said the online campaign is aimed at getting the message out to people who are at risk, or those who know someone who is affected, so they can access legal representation.

She said: “There is a deportation flight being planned by the UK Government for August 11 and already people are being detained to be placed on it. This is part of a series which began in July and that’s why we are saying more are planned for the summer.

“We are aware that there is a disproportionate targeting of Caribbean people for deportation from the UK after freedom of information requests provided the data. The Ministry of Justice information reveals that nationals from Trinidad and Tobago, St Lucia and Jamaica were the highest from the Caribbean, while those from Ghana, Nigeria, Vietnam and Pakistan were routinely targeted for deportation.”

Holbourne emphasised that those who are likely to be targeted need to get access to legal representation from now. “We are campaigning on this issue because people with family members who are potentially at risk need to get legal representation quickly, due to all sorts of issues within the detention centres with restricted access to computers, meaning limited resources available to contact lawyers and legal advisers.

“We were successful in getting lawyers at the last minute for those people from Zimbabwe who were fighting their cases in July, so it’s crucial that people start now to challenge their deportation. The Home Office will only give seven days’ notice of a planned removal.”

Another group which supports the campaign to stop these deportations is the National Windrush Organisation in Birmingham whose chairman, Bishop Dr Desmond Jaddoo, said the latest planned flight highlights the continuing hostility towards Jamaicans.

“This is the fourth deportation flight since the Windrush scandal broke in 2017. Whilst the UK government has a right to protect its borders, the claims that people are here illegally are not factually correct in all cases. Many of the cases have had some form of leave to remain in the United Kingdom, which was then subsequently revoked once they were given a prison sentence of over 12 months,” he wrote in the UK edition of The Gleaner.