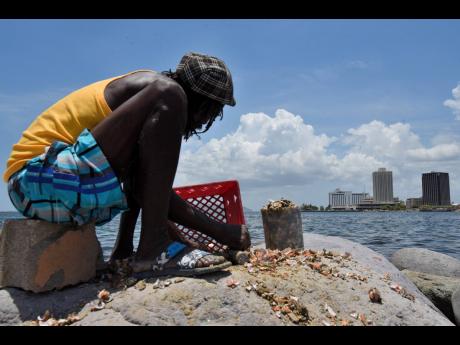 Ian Allen
William Hill, fisherman gets conch ready for the market at the Southside fishing beach in Central Kingston.

ALL PERSONS having conch or conch products in their possession have until August 21 to make a declaration of the amounts to the National Fisheries Authority (NFA), with offices at 2C Newport East, Kingston 11. This includes hotels, restaurants, bed and breakfast operations, and other such businesses which serve conch on their menu.

Persons who have the seafood delicacy in their possession and fail to declare it will be liable for prosecution after this date, with maximum fines of up to $3 million or prison terms not exceeding two years.

“After that date, it is illegal to sell, possess or import conch meat products, other than the previously declared amounts,” Chief Executive Officer of the NFA Dr Gavin Bellamy told The Gleaner. “It can be kept in cold storage or used for personal consumption but you cannot sell. So we are just asking everyone to cooperate so that we can have a good season next year. The close season for conch runs from August 1 to February 28, 2022.”

Bellamy disclosed that preliminary reports from commercial fishers is that the season which started on April 1, after an almost two-year break due to the depletion of conch stocks which made harvesting infeasible, was promising.

“I won’t say it was perfect but the fishers respected the areas that we closed, were well behaved and followed the rules. The vessels of the commercial fishers were all fitted with electronic tracking devices, so we were able to monitor them in real time, as well as the small boats that worked with them. So we knew where they were all the time. So it was a relatively good season.

“They fished in the areas where they were supposed to fish and the Jamaica Defence Force Coast Guard, the Marine Police and our enforcement team worked well together,” he added.

This was confirmed by Sergeant D. Lyons of the Marine Police, who told The Gleaner that no arrests were made for conch breaches throughout the entire season.

Bellamy further disclosed that based on reports from the fishers, the conch population seems to be on the rebound, based in the volumes caught, as well as sizes. This notwithstanding, the NFA will be conducting a survey between September and December to get an up-to-date evaluation of the population. This will inform the decision about next year’s season.

“The stocks appear to be in good standing, fishers were able to find sufficient amounts to justify their investments. So it was a promising season, based on the reports we got,” he added.