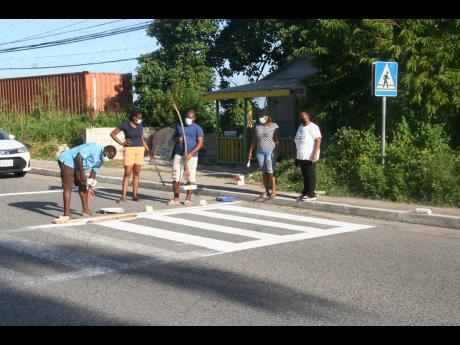 Contributed
President of the Hanover Parish Development Committee, Petra Foster (right), along with volunteers painting the pedestrian crossing in the vicinity of the Sandy Bay Basic School in Hanover.

The Hanover Parish Development Committee (PDC) has embarked on a bold effort to make the streets safer for the parish’s children by repainting pedestrian crossings in proximity to schools, in preparation for the start of the new school year.

Petra Foster, the president of the PDC, said if the Ministry of Education’s plan to start face-to-face classes in September should materialise, the safety of the thousands of children who will be traversing the streets daily requires much attention as many of them, who have not attended physical school for over a year because of the COVID-19 pandemic, might need to be re-educated on the use of the road.

Additionally, Foster said the PDC was also aware that most, if not all, of the pedestrian crossings in Hanover had become very pale, creating the necessity for them to be brightened to enhance safety.

“Most, if not all, the pedestrian crossings within the parish have paled out, so we (within the PDC) think it was prudent to put this project together to paint them over. We will be doing it in two phases. For phase one, we are now focusing on the pedestrian crossings that are in proximity to schools, because we are hoping that schools will resume in September (with face-to-face classes), and it will make it safer for our children to use them,” said Foster.

She also used the opportunity to appeal to motorists to be on the lookout for students come September, and to make every effort to protect them on the roadways.

Foster thanked Tamika Davis, the member of parliament for Hanover Western; Devon Brown and Eastom Edwards, the councilllors for the Hopewell and Lucea divisions in the Hanover Municipal Corporation; Hewing’s Supermarket in Hopewell; Michael Pennicooke; Kap Construction; and the Hopewell DAC for their support of the project.