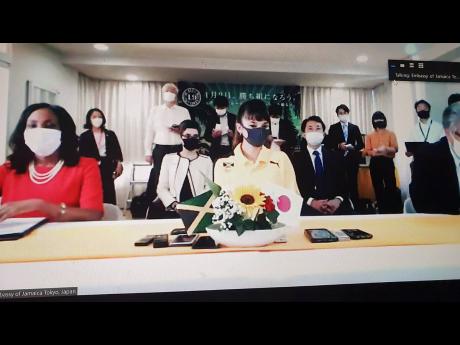 Contributed
Tijana Kawashima (right) and Jamaica’s ambassador to Japan, Shorna-Kay Richards (left), are watched by Japanese dignitaries and media during an official ceremony announcing an invitation for Kawashima to visit Jamaica. 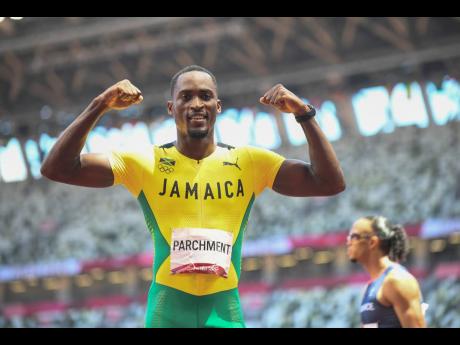 A Diamond Club presidential suite at Royalton Negril with butler service; luxury at Half Moon; a grand affair at Iberostar; the complete package at Moon Palace, Ocho Rios is how Tijana Kawashima will roll while in Jamaica.

The Japanese volunteer, who said her heart was full, accepted the invitation of an all-expense-paid vacation to Jamaica, during a virtual invitation event staged by Jamaica’s Ministry of Tourism on Wednesday night in Kingston.

Her trip will be complemented with the sampling of the pulse of the cultural centre of the Caribbean, Kingston, while she vacations at the AC Hotel in the capital city.

First reported by The Gleaner that the Jamaican Government intended to invite the Japanese woman along with a guest, Kawashima, who has earned the reputation ‘Volunteer of the Year’ from Tourism Minister Edmund Bartlett, will experience the diversity of Jamaica’s music, food, historic heritage sites, while basking in the island’s natural beauty when she cashes in on the offer.

The seven-day vacation in Jamaica is a reward for her act of kindness that helped Hansle Parchment qualify for the 110m hurdles final at the Tokyo 2020 Olympic Games, where he won gold.

“I am nervous,” was among the few words that the Tokyo Olympics worker was able to utter as she thanked the Jamaican Government on Wednesday night for enhancing the spotlight that Parchment had shone on her.

Her generosity saved Parchment from missing the opportunity to make Olympic history. The Olympian ended up on the wrong bus en route to the Olympic track stadium in Japan, where he was scheduled to compete in the 110m hurdles semi-finals.

Disheartened, he would have missed the warm-up and eventually lost his chance at running the race, but Kawashima intervened. She loaned him money for taxi fare, and the rest is history.

Parchment went on to win the first and only gold medal by the contingent of Jamaican men who competed in Tokyo.

“Your act of kindness reverberated around the globe and reminded us that there’s so much more that is right in the world today. Ms Kawashima showed us just how much we can achieve when we do indeed work together. This act of kindness by her also represents the best of the hospitality of the Japanese people,” Bartlett stated.

Jamaica’s ambassador to Japan, Shorna-Kay Richards, speaking of the 55-year relationship between Kingston and Tokyo, pointed out how people-to-people connections at all levels have enriched this partnership.

“This demonstrates in a very real way, a long-standing friendship of goodwill, of shared values and solidarity on an even larger scale,” she said at the virtual ceremony.