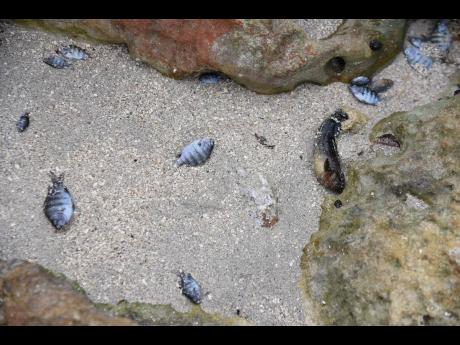 Ian Allen
Dead fishes along the shoreline of the Hellshire Fishing Beach in St Catherine last Tuesday. Fisherfolk says that it seems like the sea was polluted with substance that killed the fishes and forced other sea creatures to crawl out of the water to die. 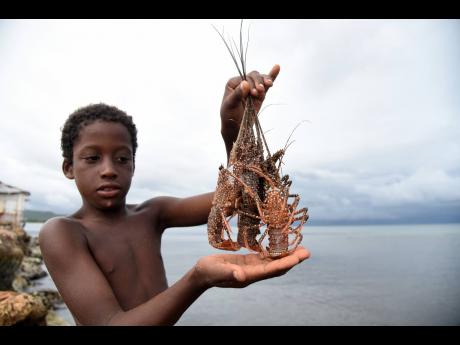 Ian Allen
A boy shows off some lobsters that he caught after they crawled out of the sea at the Hellshire Fishing Beach last Tuesday. 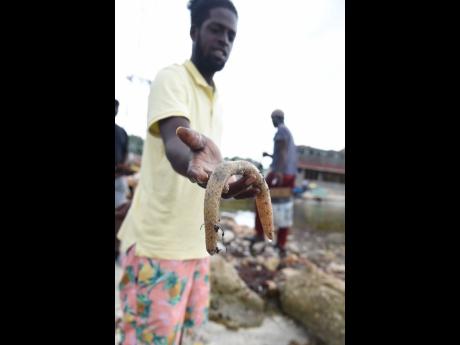 Ian Allen
A man shows one of the sea creatures that died along the shoreline of the Hellshire Fishing Beach in St Catherine last Tuesday from what is said to be a pollutant in the water.
1
2
3

The heavy showers Jamaica encountered on August 17 prevented the National Environment and Planning Agency (NEPA) from conducting an investigation into a report of juvenile fish, lobsters, crabs, sea cucumbers and other marine species washing up on the Hellshire Fishing Beach in St Catherine.

When The Gleaner team arrived at the location, anxious fisherfolk pointed to sections of the beach where the juvenile fish were dead or dying, and crabs and lobsters crawling out of the sea to die on the shore. Concerned about the threat to their livelihood but confused as to what was causing the fish kill, some of the fishers sought help in getting answers.

“Something in the water killing off everything, and the water stink! We need NEPA to come here and investigate,” declared one fisherman. However, that did not happen as the island was already experiencing heavy rains associated with Tropical Storm Grace and the agency did not think it prudent to send out its staff.

Instead, it contacted a sister agency which was closer to the beach and whose staff is equally competent in the marine sciences. However, this option did not pan out as by then, weather conditions had deteriorated and the island was under a hurricane watch.

NEPA’s Manager of Public Education and Corporate Communication, Ollyvia Anderson, told The Gleaner on Friday that given the intensity of the rainfall, the evidence would in all likelihood have been washed out to sea by now.

However, the fisherfolk were concerned that something in the water was in fact hurting the marine creatures, forcing them to flee to shore. They cited the number of juvenile lobsters, as well as crabs which had crawled out of the water to die, and the number of dead sea cucumbers which had floated to the surface.

They mentioned, also, a mature octopus that was found near to shore, which was easily captured by hand, as it was in an obviously weakened state.

The fisherfolk described as puzzling, the behaviour of welks, a sea mollusc which was seen in great numbers on the rocks. They declared that welks usually come out at night and not during the day, as was happening. They say this is clear evidence that something in the water is hurting the marine creatures and changing their behaviour.