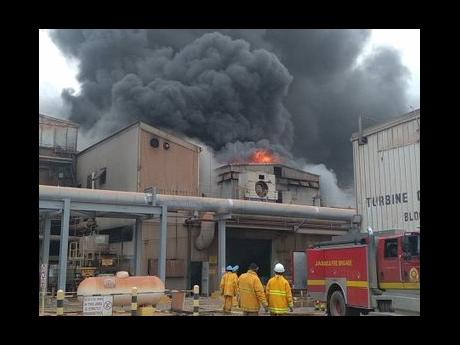 Four units from the Jamaica Fire Brigade supported Jamalco's Fire Department to extinguish the blaze and assist with cooling down.

The Jamalco alumina refinery in Halse Hall, Clarendon is reporting that seven employees were treated for smoke inhalation following a major fire at the plant on Sunday.

The fire resulted in extensive damage to the powerhouse which produces electricity, compressed air and steam for the refinery operations.

In a late-night statement, Jamalco said the employees were treated at its medical facility on the property.

Four units from the Jamaica Fire Brigade supported Jamalco's Fire Department to extinguish the blaze and assist with cooling down.

Jamalco said based on an initial assessment, there has been significant damage to the powerhouse.

It said, too, that a full assessment will be done in days to determine the cause of the fire and to estimate the full extent of the damage.

Jamalco mines bauxite and refines it into alumina which is exported from its Rocky Point Port.

Jamalco is a joint venture between General Alumina Jamaica Limited (a member of the Noble Group) and Clarendon Alumina Production Limited, a Jamaican Government-owned company.