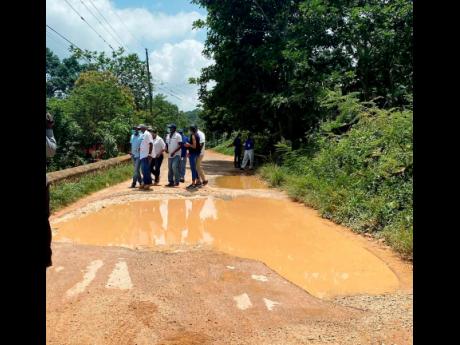 Tamara Bailey
Caretaker for the Mandeville division, Charmaine Stephenson; Member of Parliament for Manchester Central Rhoda Crawford; minister without portfolio in the Ministry of Economic Growth and Job Creation Everald Warmington tour sections of the Manchester Central constituency that will be rehabilitated in coming weeks.

Minister without portfolio in the Ministry of Economic Growth and Job Creation, Everald Warmington, has confirmed a multimillion-dollar road-repair project for three major roadways and the implementation of new traffic management systems in central Manchester, which are set to begin in the coming weeks.

The minister, who toured sections of the constituency where the repairs will be carried out, said $60 million has already been allocated for that part of the project.

The roads to be rehabilitated include Williamsfield to Cumberland, Royal Flat to Old England, and sections of Mandeville heading up to Rudd’s Corner.

He said these allocations are not for the routine quarterly maintenance, but were selected based on Manchester Central Member of Parliament (MP) Rhoda Crawford’s priority list.

The routine patching work remains for other areas, he added.

With a serious traffic management issue in sections of Mandeville, Warmington said, under the instruction of the MP, several areas will be signalised.

Following the completion of Phase One of the rehabilitation project on the flood-prone areas of Ward Avenue in 2019, the minister said a second phase will be implemented to permanently fix the issue.