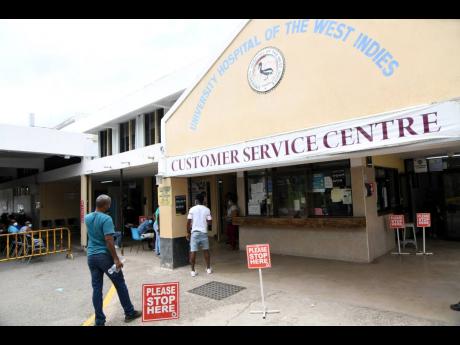 Rudolph Brown
The University Hospital of the West Indies. 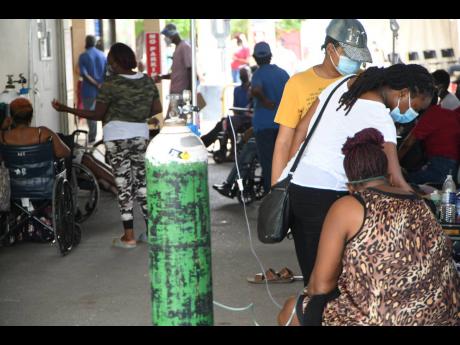 Rudolph Brown
Patients on oxygen sitting in the driveway of the undercarriage at the Univerity Hospital of the West Indies waiting for assistance on Monday.
1
2

The rising number of COVID-19 cases and the corresponding increase in mortalities have reawakened the anxiety of mortuary attendants, who are concerned for their own safety, says the director of patient affairs at the University Hospital of the West Indies (UHWI).

Morgue employees are “becoming concerned again,” Janet Powell told The Gleaner on Monday, citing the existence of the Delta strain and a high death toll on the island. She explained that the number of deaths at this time is unusually high. “Normally, you’d get up to two or three a day, but now up to four or more,” she said, referencing the COVID fatality figure.

“The fear that we saw at the beginning of the pandemic seems as if it is taking over,” Powell said, which is also causing discomfort among healthcare workers. She said apprehension has now trickled down to the general staff population, though they are not in direct contact with isolation wards.

There were 22 new COVID deaths on Wednesday, pushing the death toll to just over 1, 450. The number of hospitalisations has also increased beyond the 700 mark.

At the UHWI, the number of COVID deaths recorded since the start of the year is 220, far surpassing last year’s tally of 81 deaths. Currently, the hospital is treating 67 individuals who have tested positive for COVID-19. The hospital has dedicated three wards to treat COVID patients, separate from its ICU units.

But the increase in COVID infections is not only impacting heathcare institutions and frontline workers, it is also affecting the supply of medical-grade oxygen. According to Peter Graham, managing director of oxygen supplier IGL Blue, there is a considerable increase in demand for medical oxygen at this time due to the high rate of hospitalisation and critically ill patients requiring intensive care.

The increased demand for medical oxygen is making it difficult for the industrial gas supplier to “meet an infinite demand over an undeterminable period,” said Graham.

“The demand for medical oxygen to date is significantly more than in previous waves. IGL is doing all in its power to meet demand,” he told The Gleaner on Tuesday.

Graham did not definitively say whether or not hospitals should anticipate a shortage in medical oxygen anytime soon. However, he highlighted that currently, there are delays with the importation of oxygen, as many countries globally have suspended exports so as to cater to their own local demands. As a result, he said, the company is unable to rely on imports to supplement supplies. It is now forced to rely on local production.

In 2018, IGL invested $10 million to upgrade its factory, located along the Ferry main road in St Catherine, where it produces medical-grade oxygen.

Medical doctors have also been dealing with stress and fatigue. “It’s not a good time right now,” Professor Michael Boyne, a member of the UHWI’s Outpatient Department, told The Gleaner yesterday.

He explained that medical personnel are suffering from higher levels of anxiety and depression, when compared with earlier periods of the pandemic.

With the increased workload, more medical doctors have requested a leave of absence, and some have sought counselling. With up to 11 doctors working during the days and five at nights on COVID wards, Boyne said the medical staff are also physically exhausted.

“It’s very hectic ... with each wave the patients are sicker, and these have been the sickest yet,” he added.

Further, the wearing of personal protective equipment is making it especially exhaustive for medical personnel due to the extra heat they produced. “We may lose some of these workers, [as] it’s been such a traumatic event for them” he added.