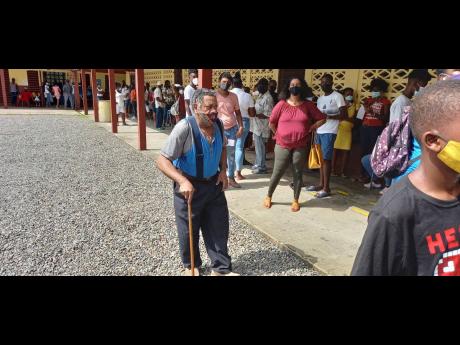 Gareth Davis
This elderly gentleman was among the bumper crowd that turned out at the Port Antonio High School to get inoculated on Tuesday.

Portlanders turned out in large numbers on day four of the Ministry of Health and Wellness’ vaccination blitz aimed at inoculating as many persons as possible, including students, as a safeguard against the dreaded COVID-19 pandemic.

Held on Tuesday at the Port Antonio High School, public health personnel struggled initially to cater to the bumper crowd that descended on the location on the final day, but eventually managed to coordinate the day’s activities with minimal fuss.

Although there was some amount of agitation shortly after 10:30 a.m., when word emerged that the centre had run out of registration forms, calm was restored in a matter of minutes after additional forms were quickly brought in.

Tuesday’s turnout was unlike the first three days, Saturday, Sunday and Monday, when the number of students and their parents and guardians, along with other persons, was relatively low.

“Yes, they actually ran out of registration forms; however, additional forms were quickly made available so as to ensure the smooth running of the vaccination blitz,” said retired nurse, Camille Dixon, who was slated to take her first vaccine.

“I was told that the turnout for the first three days was extremely low, but this crowd is big. I have been here since 9:55 a.m. and people just keep pouring in. It is as if they were waiting for the last day to show up. I am just here to take my vaccine and head back home to get some more rest. The three-day lockdown was needed, as I believe that once we are able to restrict the movement of people, then we can minimise the spread of the virus,” she concluded.

Meanwhile, Shana Neysmith, a pharmacy technician, told The Gleaner on Tuesday that her 14-year-old son, Gareth Anthony Neysmith, was rather excited about taking the vaccine, as he was anxious to resume face-to-face classes.

“He took the vaccine and all is well so far. As a matter of fact, he told me that he didn’t even feel a thing, and that the nurses were courteous and professional, “she said.

According to preliminary data from health officials, on Tuesday 690 persons were vaccinated, when compared to just over 600 persons during the first three days.