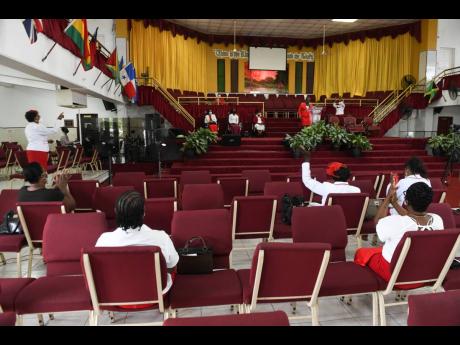 Ricardo Makyn/Chief Photo Editor
Elder Hilray Reid delivers the sermon to the small congregation in attendance, as well as others online, at the New Life Assembly of God church on Constant Spring Road in St Andrew on Sunday. 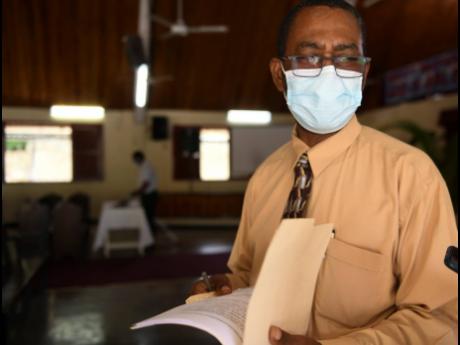 Ricardo Makyn/Chief Photographer
The Rev Sydney Hall, pastor of the Mamby Park Baptist Church, has criticised the imposition of quotas on churches for services while not clamping down on crowds elsewhere.
1
2

The Holness administration has been rebuked by a Baptist pastor for enforcing a rigid attendance quota of 20 for churches under its COVID-19 safety law while not clamping down on mass numbers flocking business places.

That criticism has long dogged the Government, with crowds swarming outside its own facilities like tax offices and the Criminal Records Office.

The Reverend Sydney Hall of Mamby Park Baptist Church has described the strictures as penalties unfairly imposed on worshippers, who he believes are among the least responsible groups for an unprecedented outbreak of the novel coronavirus.

The new measures initially banned church attendance during seven days of lockdown beginning August 22, but were relaxed to allow limited attendance after lobbying from the Jamaica Umbrella Groups of Churches.

“We have a big space, and only 20 people are allowed. Look at the bank with people lined up. Look at the supermarket. Why should we be subjected the one day we get? From this COVID thing is going on, the Church has been affected. Every time the Church shut down,” he lamented.

The pastor of the Constant Spring Road, St Andrew, church appealed to the Government to reassess the current protocols for churches, arguing that congregations were among groups nationally with the highest rates of COVID-19 safety compliance.

Hall, who has been a pastor for more than two decades, said that long before the Government put in place measures to reduce the spread of the virus, the benches in his church were nailed down and seating markers laid out.

Sunday marked the second weekend that Jamaican churches – except for those whose primary worship day is the Sabbath, or Saturday – have been held with 20 people or less.

Associate pastor at New Life Assembly of God, Oliver Tomlinson, said that it was easier to have services live-streamed on Sunday mornings than for them to be pre-recorded for broadcast, but both options required a team of persons to physically attend church.

“We are very concerned. As a church, we are not telling our members that they must get vaccinated, but we are encouraging them, and I have said to them I am fully vaccinated. I have told persons if you can’t get a ride to the vaccination centre, the leadership is willing to come and take you to get vaccinated,” Tomlinson said.

In the early months of the pandemic, churches were fingered as high-risk environments and were theorised to be the source of transmission of the first case detected here in March 2020. Other cases have been linked to church-related services, one of which triggered the quarantining of Sandy Bay and other communities in Clarendon in August 2020.

Jamaica is experiencing a third wave of the virus, with record reports of infections, hospitalisations, and deaths.

However, Winsome Exell, steward at Saxthorpe Methodist Church in St Andrew, alluded that church liturgy and fellowship have an important psycho-social role.

A number of congregants at Saxthorpe Methodist have been vaccinated while older members have remained at home.

“Being in the house of the Lord with like-minded people makes a difference rather than being at home where there is so much distraction,” Exell told The Gleaner.

“I don’t see why churches should not be able to meet. We are a disciplined people. We understand the circumstances in which we are living now and we are guided by the principles,” the steward said.

Exell said that churches with the capacity to host 50 or more people should be allowed that quota once social-distancing guidelines and other protocols are observed.

Lloyd Redwood, a member of Mamby Park for 10 years, believes that the pandemic is a fulfilment of biblical prophecy and a test of confidence in God. He intends to continue attending church every chance he can get.

At Stella Maris Catholic Church, only 20 members were present for Mass.

“The Mass should start at 9 o’ clock and finish before 3 o’ clock. We had to change the opening hours, so we had one Mass at 9 o’ clock, and then we broke for about an hour,” said lay minister Horace Romero, adding that a second Mass was set to begin at 11 o’ clock.

Its more than 1,000 members were not able to tune in to an online service on Sunday as the church’s equipment was out for servicing.