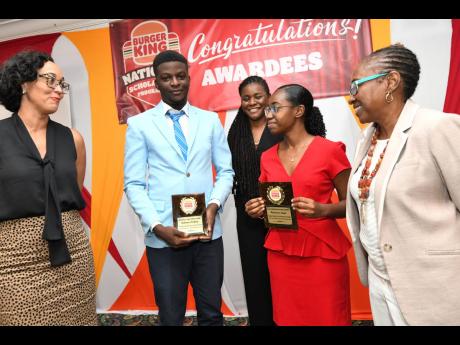 “I never thought that I would be able to go to university because of the pandemic,” said an excited Nastassia Singh as she accepted a scholarship yesterday to attend medical school at The University of the West Indies, Mona.

The St Andrew High School for Girls alumna was one of more than 20 students being awarded scholarships and grants by Burger King to pursue secondary and tertiary studies based on their outstanding academic performances.

Singh, who was presented with the Lois Sherwood Scholarship at the event held at the Knutsford Court Hotel, told The Gleaner that due to the hardships brought on by the COVID-19 pandemic and the challenges she and other students faced, she did not anticipate being able to further her studies.

Then she received the call that fired up her dream.

Expressing gratitude to God and to Burger King, Singh said that she and her mother, Maurice Francis, were appreciative of the scholarship that has set her on the path to achieving her goal of becoming a surgeon.

“I am extremely overwhelmed,” her emotional mother added. “I try so hard as a single mother [of two]. I am very proud of her, and I’m gonna make sure that she reaches her goal.”

Raheem Buckley, who is leaving from St George’s College, was also pleased to be among the select few awarded from among the more than 1,100 applicants to the scholarship programme.

With an interest in the environment and the great outdoors, Buckley has decided to pursue a Bachelor of Science majoring in geology at The University of the West Indies. This decision, he said, was inspired by his long-standing fascination with the processes that help things of the earth come into being.

His sister, Charmaine Robinson, who accompanied him at the ceremony, was also overjoyed.

“I wanna cry! I wanna jump for joy!” she exclaimed, noting that her brother has broken the “curse” by being the first in the family to study at the university level.

Head of sales, marketing, and corporate communications at the Lake Group of Companies – a group of family companies that span quick-service restaurants, including Burger King; logistics and manufacturing; and construction and property development – Sabrena McDonald-Radcliffe, said that the spirit of giving back has always been “a big part of the heart of the company”.

Despite exceeding the budget almost every year, she said that the 20-year-old sponsorship programme would keep going.

“If we were to cut any other sponsorship this year, this would never be one that the directors would consider”, McDonald-Radcliffe said, noting the value in building up persons with unrealised potential by offering them that first push through the door of success.

To help further assist students, Burger King decided to include grants “to get the next two best persons into university to at least start the process”, said McDonald-Radcliffe.

PEP scholarships and book grants were also awarded to 12 awardees who are transitioning to secondary schools. Tyreke Blackwood, who is leaving from St Jude’s Primary and heading to St Georges College, and Sahari Fowler from Davis Primary, who will be attending Old Harbour High, were the top performers among the group.

“Do not quit. You may not know where the assistance may come from, but don’t quit,” McDonald-Radcliffe advises other students who are worried that they may be hindered by their financial challenges.