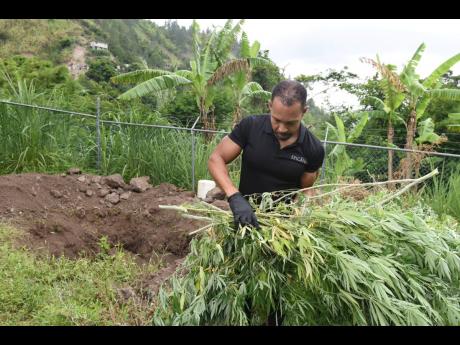 File
Founder and CEO of Epican Karibe McKenzie disposes of marijuana plants in a hole dug at the farm. The destruction of the crop was ordered by the Cannabis Licensing Authority because of a licence breach.

Stakeholders in the cannabis industry are increasingly becoming frustrated with the slow pace of approvals for licences from the Cannabis Licensing Authority (CLA). At an emergency press conference held on Saturday, tempers flared as various industry leaders expressed dissatisfaction with the CLA’s performance.

Paul Burke, programme director for the Ganja Growers & Producers Association of Jamaica (GGPAJ) castigated the CLA, stating that the body is an “albatross around the necks of this fledging industry”.

The GGPAJ is calling for a review of the regulations to allow for the quarantining, instead of the destruction, of any plants in question.

These comments came in the aftermath of the felling of over 1,000 plants last Wednesday at Epican’s farm in Guava Ridge, St Andrew. Epican CEO Karibe McKenzie explained that despite receiving expressions of support from the industry minister, the CLA still went ahead with the destruction of the plants.

State Minister in the Ministry of Industry, Investment and Commerce, Norman Dunn, told The Gleaner that his ministry is currently reviewing existing regulations that govern the sector. “The destruction of plants is not something that we take lightly any at all, and therefore, we have to work at some of the internal and legal arrangements that look at some of these issues as they are being presented now,” said Dunn.

However, he clarified that the ministry does not interfere with the operations of the CLA, as the ministry is policy-driven. A cannabis industry development task force has also been established to make recommendations over the course of two years to the Cabinet about steps to improve the industry.

Several stakeholders have charged that the industry may not survive during this time, partly due to the vindictiveness of the CLA. Karibe revealed that Epican’s retail store was closed despite the CLA having all of its documents and his company being allowed to operate its stores two months after the expiration of its processing and retail licences.

“It was only at the point where our attorneys decided to get aggressive and threaten to take them to court that the CLA decided to become malicious and close our retail locations,” he explained.

Company President Dwayne McKenzie shared that within one hour of the company killing the plants, he received a phone call from the CLA stating that the cultivation licence was ready to be collected.

Nevertheless, the CLA has argued that the Dangerous Drugs (Cannabis Licencing) (Interim) Regulations, 2016 prohibits the cultivation of new crops during extensions.

This explanation has been rejected by Karibe, who argued that 400 of the plants destroyed were in the ground before Epican’s licence expired, but the CLA refused to do the harvest.

Current operations are also being reconsidered which could put 50 workers on the unemployment line. Epican is also not ruling out taking legal action as US$450,000, or approximately J$68,130,000, was lost due to the destruction of the plants and the two months’ closure of its retail stores.

This fate could also befall entrepreneur Wayne Isaacs, whose company, Green Stripe Naturals, has been waiting in limbo since January 23 for the renewal of its licence.

Isaacs explained that his company was allowed to schedule harvests in February and March. “At the end of March, I received a letter from the CLA basically saying that we are extending your license until June 25. The terms and conditions of your licence remain unchanged.”

In total, 1,009 seeds were planted after this extension, and the company subsequently requested a harvest of crops for July 19. Thus, Isaacs expressed dismay when he received a call three days before the harvesting from the CLA’s enforcement division, explaining that his plants were illegal and they had to be destroyed.

Despite meeting with the CLA and providing reports about the plants, up to Wednesday evening no update has been received. His losses have continued to balloon to at least US$250,000, as mould has begun to consume his remaining plants not destroyed by heavy rains. “Up to now, all I have been doing is watching the plants die … . The delay with the licence is what led to this. If the licence was processed on a timely basis, we would not be in this situation.”

Isaacs is also reassessing his US$5-million investment in Jamaica, as well as further expansions planned for this year.

Dunn has sought to provide reassurances to stakeholders and shared that legislative changes will be coming before the end of the year. He described it as “sad” that it has taken over five years to review the regulations. The CLA has also been tasked to slash waiting times for the renewal of licences.