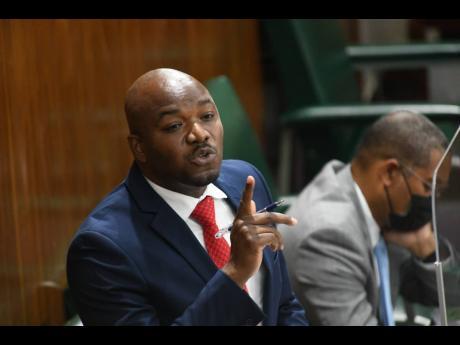 Cousins: “To transfer customers’ water bills in the middle of the pandemic to a collection agency is unconscionable, and therefore, it should immediately be rescinded as it shows no compassion for the poor and vulnerable, including disabled Jamaicans." - File photo.

The Opposition says it is against a move by the state-owned National Water Commission (NWC) to sell a portion of its debt to a collection agency.

NWC President Mark Barnett told a quarterly press briefing yesterday that the utility company is packaging $15 billion to $20 billion of its debt for sale to a collection entity at a discounted rate.

“There are no specifics in terms of customer class. It will be inclusive of domestic, condominium and commercial [customers]. Obviously, government accounts will not be part of that,” he said.

READ: NWC to sell billions in debt to collection agency

Opposition Spokesperson on Water, Lothan Cousins, says the Opposition believes that given the current circumstances in the country, such a move would be ill-advised and would add further strain on Jamaicans.

He is asserting that the collection agency approach is aggressive and will only worsen the predicament of those in low-income communities and struggling daily to make ends meet.

“To transfer customers' water bills in the middle of the pandemic to a collection agency is unconscionable, and therefore, it should immediately be rescinded as it shows no compassion for the poor and vulnerable, including disabled Jamaicans,” Cousins argued in a statement today.

While acknowledging the financial challenges facing the NWC, he is contending that a more inclusive approach should be taken such as offering incentives like debt forgiveness/write-offs and deferment plans to encourage compliance and other measures to entice customers to settle outstanding accounts.

He says the NWC's billing system must be upgraded as there have been too many complaints of overbilling, and in some instances, persons have received bills despite not having water in their pipes for years.

The Opposition spokesperson says, instead of adding to the stress level of the working masses, the NWC should focus on devising an efficient and reliable supply system to assist in the fight against the COVID-19 pandemic.

He says the party continues to be concerned about the lack of focus on rural community water supply systems and urges the Government to do all within its power to address it.

Cousins says that if the Government insists on the plan, any transaction on the sale of NWC's debt must be fair, competitive, and transparent.