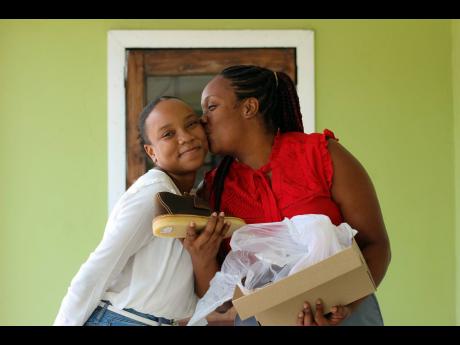 Stephanie Lyew
ABOVE: Sutanya McKain (right), mother of Anna-Lisa Shirley, plants a big kiss on her daughter’s cheek after unboxing the Clarks Originals received from Kicks For Kids, Life Yard and Every Mikkle foundations. 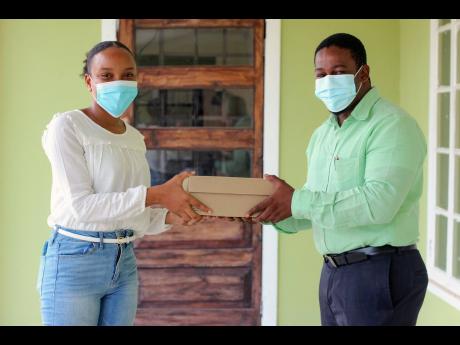 Stephanie Lyew
Anna-Lisa Shirley (left), receives her prize from the managing director of the Kicks For Life Foundation, Khalil Munroe, for writing a compelling letter about her mother to the initiative spearheaded by Kicks For Kids, Life Yard and Every Mikkle foundations. 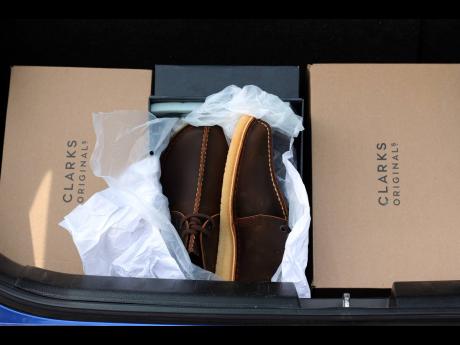 Stephanie Lyew
A trunk filled with Clarks Originals’ Desert Treks to be delivered to the recipients of the Kicks For Life initiative. 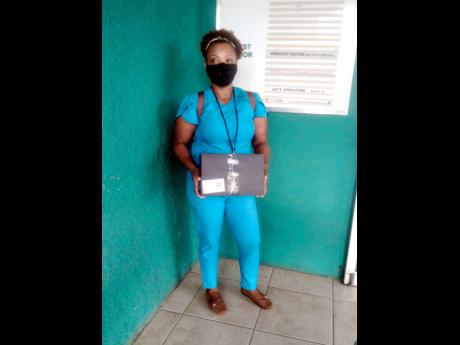 Contributed
Iyeshia Spence, a frontline worker from the parish of St James, was surprised to know her son Demoy Dewar had entered a challenge on social media so that she could be gifted with a pair of Clarks. The surprise continued when she received them at work. 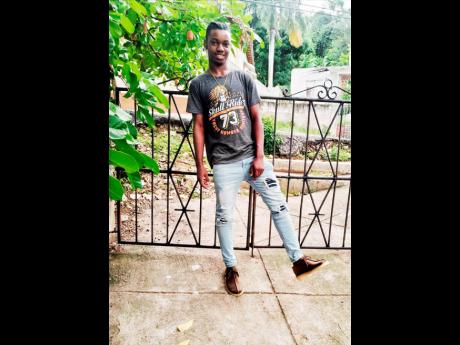 Contributed
Demoy Dewar was not only able to get his mother Iyeshia Spence a pair of shoes, which he said she ‘more than deserves’, he ended up with one of his own.
1
2
3
4
5

The leadership of three foundations: Kicks For Kids, Life Yard and Every Mikkle, motivated by Alex Moore, put their heads together to decide on an initiative that could help put a smile on faces in a time of great despair. The resulting effort focused on giving back a piece of culture to people who would otherwise be unable to experience it, and all three organisations have shared visions that revolve around helping indigent people and communities. So, it was a natural fit when the group was provided with a collection of Clarks Originals to give away.

“Helping others is 100 per cent our core, and naturally, for my foundation, it was about the children, so initially, we wanted to kick-start the initiative and choose all the winners in May, which is Child’s Month, but it did not work out that way. Plus, we also had a lot of adult sizes too,” says Khalil Munroe, managing director of Kicks For Kids Foundation.

With the belief that allowing persons to ‘pay it forward’ by providing someone they thought deserved a pair of shoes, specifically Clarks, would help to build connection at a time when people were experiencing separation from relatives, friends, and outside, they launched the initiative at the start of summer. It required entrants, as young as eight up to 17 years old, to write a letter of no more than 500 words about what Clarks means to them, why they would want one or who they would give a pair to and the reason. There was an overwhelming response across the island, and the initiative has been a resounding success thus far.

“Clarks Originals and Jamaica are inextricably linked, and after receiving the generous gift from the international shoe icon, our organisations felt it was important to give back in a meaningful grassroots campaign, and that also included what we called ‘Random Acts of Kindness’,” he said in an interview with GoodHeart.

Two entries remain stamped in the foundation manager’s mind; one was of a teenager who spoke about the quality of the shoe and how he would love for his mother, a nurse, to acquire a pair for her hard work. “The young man wrote eloquently about the shoe and stated that whenever persons see nurses in Clarks, they’re given more respect,” Munroe shared. “The other was a little girl who wanted to gift her father for his selflessness. These two warmed my heart as it showed genuine love for their parents.”

Anna-Lisa Shirley and her mother Sutanya McKain were sceptical at first, and when they received the call to claim the prize, they approached with caution. “I entered because I always see my mommy on the website looking at the different designs, but I know because of me and my sister, it is a challenge to go and spend money on a Clarks. So, I thought if I could express that and get a shoe for her, it would be a great way to say thank you to her,” Shirley shared.

McKain added, “Kicks For Kids and Life Yard should consider doing something connecting with Clarks for another leg of the giveaway. Clarks is without question our National Shoe, it doesn’t matter the style, they are a timeless symbol of sophistication — they are ‘Kicks for Life’, and while I may like the pink Wallabee design, a win is a win, and this is one I truly appreciate.”

Munroe says the team would love to continue the initiative, “as we feel there are many more persons, particularly children, who would love the opportunity to own a pair of Clarks. We plan to have future competitions like this one and hope that persons keep writing in while we work to see how we can make their wishes come true.”

The idea to gift persons with shoes – Clarks Originals – was the brainchild of Moore, who, as the line producer for the Clarks and Jamaica documentary, played an integral role in making the connections to pull the entire project together from start to finish.

According to Moore, on completion of the documentary, there were pairs of shoes left over, and he realised that there was an opportunity to add to the indelible footprint the brand has left on Jamaican soil.

“One of the main things said in the documentary was that the Clarks brand is embedded in our culture and history. Some people don’t have a good pair of shoes, much less a Clarks [so] I wanted to give persons who I felt not only needed shoes but would appreciate the history of it,” he told GoodHeart.

Moore added, “I connected with James Frapwell, Clarks Originals global head of marketing, and Lewis Clark, the global creative lead, and they said, ‘Sure Alex’, and gave me full permission. Shoes were also issued to members of the production to do the same. Blessed with that opportunity, I knew I couldn’t just choose people at random and just give them out.”