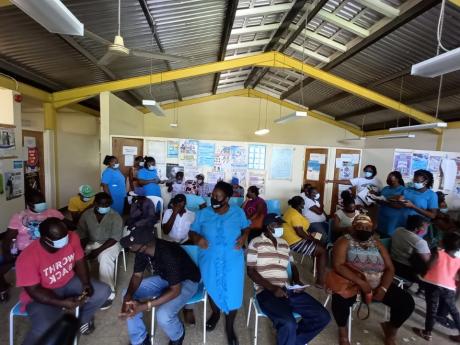 Residents waiting to be vaccinated against COVID-19 at the Milk River, Clarendon on September 9, 2021 - Olivia Brown photo.

Scores of residents turned up at the Milk River Health Centre in Clarendon yesterday to be vaccinated against COVID-19.

The MP lamented that his constituency was the only one without a vaccination site.

One former anti-vaxxer, Craig 'Jah Cat' Taylor, told The Gleaner that a site closer to home helped in boosting his change of heart.

"At first I was saying I didn't want to take the vaccine with all the propaganda and speculations that were going on in the media and the conspiracy theories," he added.

Taylor said he arrived at the site at 8:30 a.m but got his shot at 2:30 p.m. due to long lines and students being given priority.

Cousins described the community-based site as a step in the right direction and added that he is looking forward to more sites being established across the constituency.

"The constituents are happy for the site. The positive turnout today is a clear indication that we have many individuals from rural Jamaica who are interested in being vaccinated but are finding it extremely difficult to afford the transportation to vaccination sites that are several miles away," Cousins told The Gleaner.

The MP says he remains committed to assisting the Ministry of Health and Wellness in achieving herd immunity.

While noting that he was pleased to see a site in the constituency, councillor for the Milk River division Carlton Bailey claimed that politics has put the constituency on a back burner.

"You have six constituencies in Clarendon and the other five that are controlled by JLP Members of Parliament, they have two and three and four [vaccination sites] and from the blitz started I have been asking for a day and nobody paid us any mind until we decided that we are going to make trouble," said Bailey.

Adding that the distance of vaccination sites was a deterrent for people getting the jab, Bailey said his team has long been advocating for a site in the area, but said those calls fell on deaf ears.

"We have always said 'bring it come to the people, bring it into the community and you will get a better pull,' and we see it this morning. One day alone cannot do for the division," he said, adding that vaccines had began to run short with several residents were still turning up to be inoculated.

​He lauded Cousins, adding that their partnership and advocacy have been bringing much-needed change in the constituency.

Sheffaneese Knight, public health nurse for the Race Course health district, which comprises the Race Course and Milk River Health centres, theorises that the administration of more Pfizer shots could be an indication that more people are coming forward to be inoculated.

"The turnout is good because Milk River has a population of roughly 4,000 and over 140 [doses] were given out, so that's a fairly good turnout in my estimation."

She said she is expecting a bigger turnout at the next vaccination site at Kemps Hill High School in Race Course on September 18.