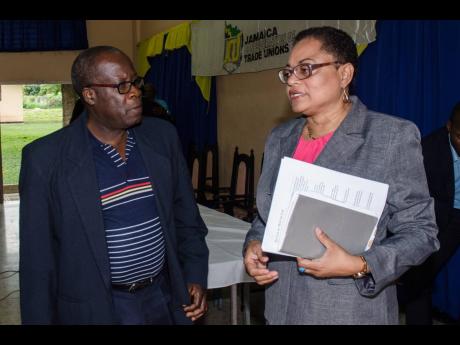 A prominent trade union leader has expressed concern that the country’s COVID-19 vaccination programme is at serious risk of being derailed by conspiracy theorists who are drowning out the voices of reason. Jamaica is currently struggling to contain a spike in the number of infections, with the Ministry of Health and Wellness confirming the presence of the Mu variant of the virus in the island last Thursday.

Assistant General Secretary of the Jamaica Confederation of Trade Unions (JCTU), Clifton Grant, is convinced of the need for targeted interventions, not only to provide a counter-narrative, but also to influence behaviour change among workers who are influenced by indecision, largely based on misinformation being peddled by naysayers.

He has recommended that the trade union movement collaborate with the health ministry in taking the COVID-19 vaccines into workplaces and answering any questions employees may have, recommending that this would go a far way in addressing vaccine hesitancy at the national level.

“We have to address some of the major problems we have in terms of misinformation out there, and the behaviour some prominent persons and professionals, who we think would be at the head of the line in leading the charge for the country to be vaccinated, are engaged in activities ... which are confusing the workers,” he told Friday’s joint press conference of the JCTU and the health ministry, held at The Jamaica Pegasus hotel, New Kingston.

Grant, who is also vice-president of the University and Allied Worker’s’ Union , informed that he is fully vaccinated. He has endorsed moving away from vaccination blitz sites such as the National Arena and getting them to a more granular level, in the work environment where employees would be much more comfortable expressing themselves.

Meanwhile, Minister of Health and Wellness Dr Christopher Tufton assured the nation that the vaccines are no longer in short supply, with 800,000 doses acquired in August.

“Over 1.1 million vaccines to date and counting, we expect vaccines next week, and we will see vaccines coming in every few weeks, or at least every month, going into the new year. So we no longer have that issue,” he told the press conference, before going on to affirm the safety of all vaccines available to Jamaicans.

“We have never thought about bringing in vaccines that are not approved; that have not gone through clinical trials; that have not been examined ... the data by the experts at the highest level, the World Health Organization, and therefore given the seal of approval as being safe for our people to take.

“Indeed, the strength of our immunisation programme over many decades, which has contributed to our Human Development Index life expectancy being where it is, fighting against things like polio and other such diseases, has been directing the approach to vaccination, and we have kept that standard as it relates to COVID 19 vaccines. That is something we want to reassure the country about and persons who may have questions.”

This latest initiative also had the backing of the Jamaica Association of Local Government Officers; National Workers Union; Union of Technical, Administrative and Supervisory Personnel; the Bustamante Industrial Trade Union and the Jamaica Civil Service Association.