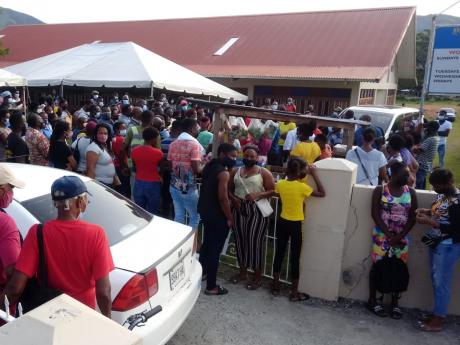 Hundreds of residents who turned up this morning at the Yallahs Health Centre in St Thomas for a scheduled vaccination blitz were left disgruntled following news that the activity was moved to the Yallahs Baptist Church.

Residents argued that they were not told about the change.

“We went to the Yallahs Health Centre because that is where was being advertised for vaccination. It caused a lot of chaos until even now because when we relocated nobody was there to inform us about anything. We only saw the tents [at the church grounds] so we went,” said Sandra Nelson who showed up with her children and other family members to be inoculated.

The resident shared that though the two locations are within walking distance, several elderly persons were unable to make the trek.

Nelson described the process as tardy and disorganised.

“My sister came out from after four this morning and she come see people who say they were here from after three. Up to now is only registration ah gwaan and it's a lot of people here,” she said.

During a blitz in August, the St Thomas Health Department expanded the sites in the parish providing COVID-19 vaccinations arising from overcrowding.

Admitting that the Yallahs Health Centre is too small to accommodate a crowd, the health department had relocated the continuation of vaccinations to the Yallahs Baptist Church and the Morant Bay Health Centre.