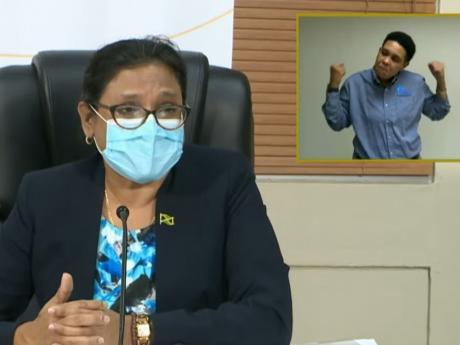 Bisasor McKenzie: I am a little bit taken aback by the consideration that we are trying to hide deaths.

WESTERN BRUEAU:
Chief Medical Officer Dr Jacquiline Bisasor-McKenzie says she is taken aback by assertions that the Health Ministry has been seeking to cover up COVID-19 deaths that occurred as a result of an oxygen three weekends ago.

On the weekend of August 28 and 29 several hospitals were out of oxygen and others ran low.

The Ministry of Health recorded 18 deaths on August 28, and another 18 on August 29.

On Tuesday, Bisasor-McKenzie said efforts are ongoing to determine what led to the deaths of those persons who passed away during the weekend of the oxygen shortage.

“We have made a commitment that we are working on those details to try and find out, but the thought that we are hiding deaths really should not be entertained by the Jamaican public, because I think we have been very transparent in what it is that we do and how it is that we have been trying to manage this crisis,” Bisasor McKenzie said.

Five days ago she had said it was difficult to determine deaths resulting from oxygen shortage since the pathology of severe COVID is such that most deaths result from respiratory failure or multi-organ involvement.

Meanwhile, Health Minister Dr Christopher Tufton has rebuffed suggestions for an independent enquiry at this time into circumstances behind the oxygen shortage.

"I am not saying that in these things, one should not be open to independent enquiries. What I have said is that we need to allow the internal processes to work. This idea of calling for an enquiry and just jumping over the internal processes, certainly it is hardly ever done in some spaces,” said Tufton.