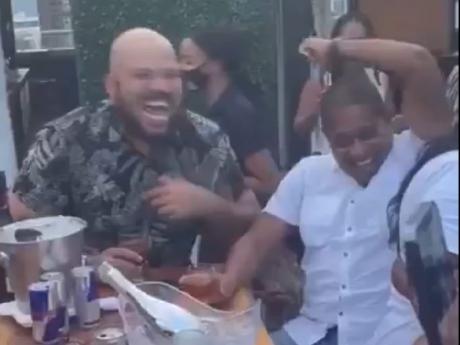 In this screengrab, Councillor Andrew Bellamy and Agriculture Minister Floyd Green are captured in a festive mood at the party.

There's outrage on social media over a video that has emerged showing Agriculture Minister Floyd Green at a hotel celebration toasting to a COVID-19 no-movement day comment.

Jamaica Labour Party (JLP) councillor for the Mona Division in the Kingston and St Andrew Municipal Corporation, Andrew Bellamy, is also seen in the video which was posted on Twitter at 8:32 p.m by @darkkswan.

More than a dozen persons were seen at a table with food.

Green and Bellamy joined with others in the maskless group in a toast after a member said “no movement day”.

There were also cheers to “Shower Labourite,” a phrase used by supporters of the ruling JLP.

Telephone calls and messages to Green and Bellamy have gone unanswered.

Sources close to the event have confirmed that it was a birthday celebration Tuesday at the R Hotel in St Andrew for an associate of Green, who is also the Member of Parliament for St Elizabeth South Western.

Tuesday was a no-movement day as part of measures to contain the spread of COVID-19.

The Prime Minister and Green are scheduled to address the nation Wednesday in the House of Representatives.

Holness is expected to speak on COVID-19 containment measures.

On Tuesday evening, Health Minister, Dr Christopher Tufton, was asked by The Gleaner when the government would explicitly restrict gathering for entertainment activities in hotels.

Suggesting that an assumption was being made, Tufton said the hotel space is guided by protocols.

Twitter reactions:
“So basically no movement days are for poor people.. gotchya”
- @Puzzle_Xiii

“Kmt so people whole business cut inna half right now but politician outside a party and a toast bout "No Movement Dayy Zany faceWinking face with tongueZany face". This is so insulting and offensive to watch. Unnuh ago "investigate" this one too? ”
- @ChrisMalachi

“Of course these ppl would think the law doesn't apply to them. Of course.”
- @Cynycter

“If the government no ignore it we're gonna hear that it's an old video.”
- @sancarbro1