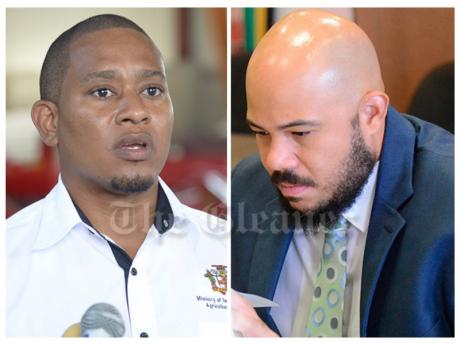 Agriculture Minister Floyd Green and Mona Division Councillor Andrew Bellamy were among a group of maskless people at a party.

Agriculture Minister Floyd Green has resigned following a video in which he was among a maskless group of people at a hotel toasting to no-movement day.

“I have disappointed so many,” said Green.

He met with Prime Minister Andrew Holness this morning.

"It was wrong," said Green of his participation in the party.

Mona Division Councillor Andrew Bellamy was also in the video.

It is understood that he will be relieved of his duties on all state boards and committees of the Kingston and St Andrew Municipal Corporation.

In 2011, I decided to get involved in representational politics because of an desire to do my part in creating a better Jamaica. It has been a very challenging journey, but I have been extremely blessed to have served as president of Generation 2000 and to be elected on two occasions to represent the people of South West St. Elizabeth.

At every step of the way I have worked hard. I believe I have conducted myself with dignity, honesty and discipline.

I have remained transparent, above the fray of tribal politics and have treated every single person I come across with respect.

However, today, I have disappointed so many. My family including my son, my Prime Minister and most importantly, the people of Jamaica who I have sworn to serve.

No matter how briefly, and regardless of the circumstances, I should never have participated in any engagement that could indicate a lack of appreciation of the difficult and serious realities that now face the entire country.

My actions have demonstrated a lack of sensitivity for the difficult realities that all of us are facing currently.

I accept that this was an error in judgement and that it sends the wrong signal especially in light of the Government's drive to reduce the spread of Covid 19. For this I am really and truly very sorry.

Therefore, I met this morning with Prime Minister, the Most Honourable Andrew Holness ON,  PC, MP and indicated that I will withdraw from the Cabinet.

I will work hard to regain the trust and regard of the Jamaican people but I remain 100% committed, to serve the people of South West St. Elizabeth.

I can and will promise that this lapse in judgement will not reoccur.

Again, I apologise, promise to in the future do right by the Jamaican people.