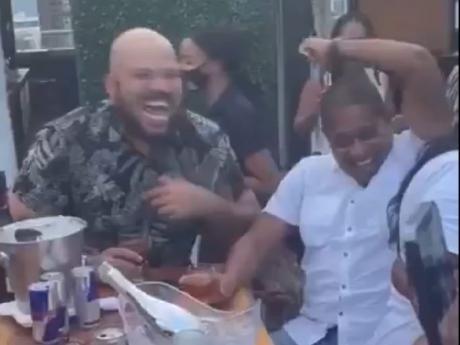 In this screengrab, Councillor Andrew Bellamy and Agriculture Minister Floyd Green (right) are captured in a festive mood at the party.

Leader of the Opposition Mark Golding says Agriculture Minister Floyd Green should resign or be fired by Prime Minister Andrew Holness after he was seen in a video at a champagne-popping birthday celebration during curfew hours.

The viral video has triggered widespread outrage, with claims of double standards by the Government.

In a statement this morning, Golding says for a Minister of Government, who ought to be setting an example for the population as a whole, to be flouting the no-movement day restrictions and partying with friends, is an arrogant insult to the people of Jamaica.

He described Green's action as an inexcusable, disgraceful dereliction of duty.

When a Minister of Government, who sits in Cabinet and is collectively responsible for its decisions, is caught red-handed violating the spirit and intent of those laws, that Minister must be made to resign.

The country has endured four successive weeks of no-movement days, as Jamaica struggles to get this terrible third wave of the COVID pandemic under control.

Many people have suffered tremendous pain and hardship from being forced by law to stay home for three days a week.

Those without the money to stock up for lockdown, and those who hustle for their daily bread have gone hungry, as have their children.

Last night, a video went viral on social media showing the Minister of Agriculture, Floyd Green, Councillor of the KSAMC Andrew Bellamy, various public officials and one of the Prime Minister's photographers indulging in a champagne celebration at a hotel in Kingston yesterday, which was a no-movement day.

Ordinary Jamaicans would be locked up and charged with offences under the DRMA [Disaster Risk Management Act] for doing this. Yet a Government Minister and his cronies were there yesterday flossing and braffing away as if the COVID restrictions mean nothing, showing utter contempt for the rules that his Government has imposed on the people.

Jamaicans are disgusted by the continuous double standards, with one set of rules burdening the people, while the well-connected and privileged get to do whatever they like.

For a Minister of Government, who ought to be setting an example for the population as a whole, to be flouting the no-movement day restrictions and partying with friends, is an arrogant insult, a slap in the face of the people of Jamaica.

I am calling for the Prime Minister to ensure full accountability for this disgraceful dereliction by a Minister of Government. It is inexcusable. Nothing less than the resignation of the Minister will do. He must pack his bags and go.