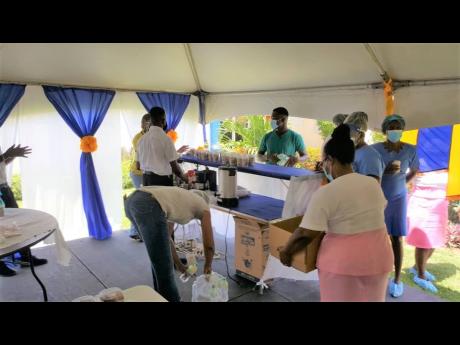 Contributed
Members of staff at the Savanna-la-Mar Hospital in Westmoreland receive food items distributed by members of the Westmoreland Chamber of Commerce and Industry and the Rotary Club of Savanna-la-Mar, during both clubs’ outreach efforts to the hospital on Sunday, September 12.

Nurses and other staff members at the Savanna-la-Mar Hospital in Westmoreland got a much-needed reprieve over the weekend as they were treated to an outreach meal distribution, courtesy of the Westmoreland Chamber of Commerce and Industry (WCCI).

Members of the WCCI, in partnership with the Rotary Club of Savanna-la-Mar, came out to supply the hospital’s staff with foodstuffs to include sandwiches, soup, fruit plates, cake, and beverages in a three-day humanitarian effort that started on Saturday and continued to Monday.

Cosmond Jackson, the vice-president of the WCCI, told The Gleaner that vaccination workers at the hospital were also treated through the food distribution initiative, at a time when the current islandwide weekend lockdown would have meant limited access to ready-made meals for those volunteers.

“The initiative has gone very well, and the staff were very appreciative of the gesture,” Jackson said in outlining the outreach effort.

“The feedback from the hospital workers is that the business community is showing some gratitude to them for what they are doing at this time. In addition to that, we are doing other things like providing lunches for the vaccine workers over the lockdown period, and we are providing for the vaccine workers over the three-day period,” Jackson added.

The outreach effort comes at a time when the Savanna-la-Mar Hospital is grappling with its bed capacity being exceeded due to the number of COVID-19 patients being admitted, as well as several nurses falling ill after contracting the virus.

On August 31, the Type B medical facility was rocked by the death of one of its nurses, Diagrea Cunningham, who was the second nurse in Jamaica to die from the coronavirus following the passing of the Percy Junor Hospital’s Annette White-Best three weeks earlier. At the time of her death, Cunningham was a supervisor for the Savanna-la-Mar Hospital’s paediatric and accident and emergency wards.

Work is currently under way to construct a field hospital with a 30-bed capacity to ease the pressure on the Savanna-la-Mar Hospital, plus an additional 20-bed space and retrofitting of a nearby church for additional beds. The Ministry of Health and Wellness has estimated that the work on the field hospital will be completed in a month’s time.

In the meantime, Eric Clarke, chairman of the Western Regional Health Authority, which has responsibility for the Savanna-la-Mar Hospital, lauded the WCCI for its cooperative efforts alongside the Rotary Club to ease the burdens of the hospital’s staff.

“The WCCI has been very active over the past two weeks, but they made it here especially for today in order to bring some sandwiches, cake, soup, soda and water for the hospital. It is a very good effort on the part of the Chamber, and it was well received and well needed because it is good to see the business community reaching out to support the front-line staff here,” said Clarke.