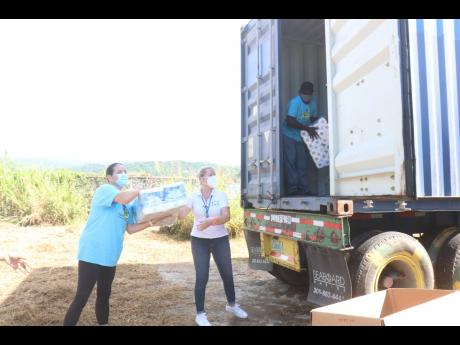 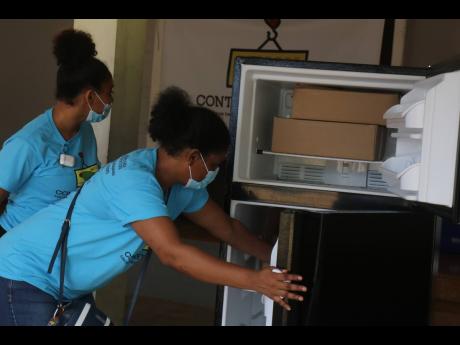 Contributed
Members of the Hanover Charities team check out one of the stocked refrigerators.
1
2

School supply for 6,000, hygiene kits for 4,000 students, mattresses, bed coverings and sheets for the West Children’s Home are among the items shipped in the historic 40 foot ‘Container of Love’ that was stripped in Hanover on Monday afternoon.

The parish, which discarded the name ‘Cinderella’ several years ago, will share the relief supplies, valued at J$21 million, with Westmoreland as part of Hanover Charities and Cornerstone Jamaica’s intervention in the lives of the neediest in the parishes.

Six months in the pipeline, the container landed in Montego Bay recently, turning the dream of both charities into a reality.

Approximately 40 schools have been pre-selected for the huge project, which will also help two families who lost all their belongings in fires, infirmaries with diapers, and school canteens with appliances such as refrigerators and stoves.

Speaking with The Gleaner during the stripping of the container, which will be donated to the Green Island High School when emptied, Chairman of Hanover Charities Katrin Casserly said the COVID-19 pandemic had created more inequities across communities in Jamaica, “leaving the institutions and organisations that we serve, as well as more families, having more needs”.

Casserly said that for years, Hanover Charities had wanted to embark on this type of project. However, they always knew they could not do it without a partner, because logistically it is an extreme undertaking to gather all the donations and all the purchases overseas, then pack and ship them to Jamaica.

Cornerstone Jamaica’s Executive Vice-President, April Phinney, concurred, noting that her organisation and Hanover Charities became instant partners, once they realised the impact the project would have on the thousands of beneficiaries.

Phinney, who was integrally involved in the packing of the container, wants the project to be an annual event. The partnering with Hanover Charities, which is a 501C3 organisation, allowed them access to duty-free waivers, which they say they could not have done without the buy-in of the Government of Jamaica.

“In this undertaking, the (Jamaica) Customs, Cargo Handlers, and Owen Brown, the custom broker, really jumped through hoops to get all the paperwork done and get this container out within a week from the apron,” Casserly stated, lauding the people behind the scenes.

No stranger to the world of giving, Hanover Charities, the single largest charity in western Jamaica, has donated over US$4.5 million (J$826 million) to the parish, in the last five years. This year alone, the charity expects to award $29 million in their annual scholarship programme.