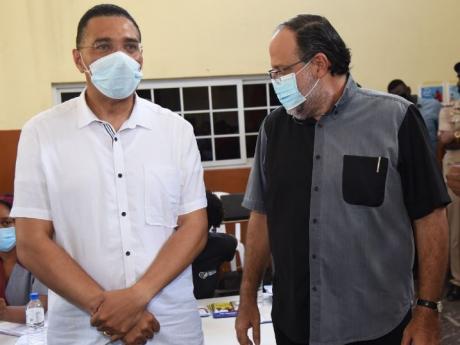 Prime Minister Andrew Holness says former Agriculture Minister Floyd Green, who resigned on Wednesday, will have a role to play in the House of Representatives given his expertise.

Holness has signalled that Green could be heading for parliamentary committees.

Green's resignation came hours after a social-media storm swirled over a video of him, Mona division Councillor Andrew Bellamy, and others partying maskless at the R Hotel in New Kingston and toasting to no-movement day.

Bellamy also resigned from the board of the South East Regional Health Authority and from all committees that he chaired at the Kingston and St Andrew Municipal Corporation.

Holness stated on Wednesday that at his meeting with Green on his resignation, it was discussed that there may be other areas in which his expertise could be offered.

READ: Floyd Green could be engaged in other areas, says PM

The remark was criticised by some as sending the wrong signal as it regards accountability.

Holness, who was on tour at the vaccination blitz site in the South Western St Andrew constituency today, clarified that he is of the view that Green could offer his expertise in Parliament.

“Former Minister Green still remains a member of parliament (MP) and in Parliament there are certain functions which members of parliament are entitled to do,” he told The Gleaner.

Holness said that his administration has seen where there is a need to strengthen parliamentary committees and that the addition of Green is likely to do that.

He said that it is his view that the 39-year-old attorney, now being available, “could be quite beneficial”.

Holness' initial comment had drawn criticism from the likes of former St James Central Member of Parliament and political analyst Lloyd B. Smith, who said that Green should stay in the confines of his South Western St Elizabeth constituency and work his way back up.

But even then, Holness said that there were opinions still being offered to him suggesting that Green should not have had to resign in the context of Jamaica being a forgiving country.

“It's something that I have wrestled with. Yes, our culture, I'm sure the Leader of the Opposition would agree, is one where we forgive. But, we are now evolving into a new dispensation, a new culture of accountability and I think Floyd acknowledges that,” Holness said.

Opposition leader Mark Golding, who joined the prime minister on tour, objected to his position, arguing that when signals of accountability are being sent it is critical that they are not diluted or appear to be a façade.

He said Green's trespass of frolicking with friends at a party in New Kingston on a no-movement day was unacceptable to the society.

Golding said Green made the right decision in stepping back and should not resurface until he shows a new level of maturity on important issues.

“This is not the time to be trying to find avenues to sort of re-accommodate him elsewhere. He's an MP and he can play that role as an MP,” Golding said.

Holness interjected, stressing that Green will not be serving outside of his parliamentary duties as an MP.

“He's not going to be given a role outside of his original duties which are as a member of parliament. So that's not a delusion in any way of the accountability step that he has taken,” Holness rebutted.