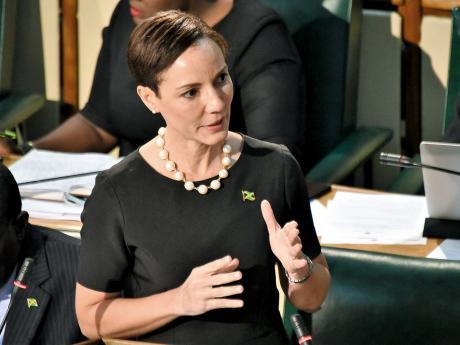 Johnson Smith said that the bill has clear provisions that protect individuals in the workplace or institutions from unwanted sexual advances - File photo.

Debate on the Sexual Harassment (Protection and Prevention) Act, 2021 got under way in the Senate today as lawmakers push to pass the groundbreaking legislation to stop the offensive practice in Jamaica.

The proposed law is gender neutral and seeks to protect and prevent sexual harassment against both men and women.

Opening the debate in the Upper House, Leader of Government Business Kamina Johnson Smith, said the bill was not aimed at preventing persons from starting new relationships.

Johnson Smith said that the bill has clear provisions that protect individuals in the workplace or institutions from unwanted sexual advances.

The bill also addresses concerns relating to sexual harassment in the context of the landlord and tenant relationship.

Making reference to the Women's Health Survey 2016, the leader of government business said the study showed that 24 per cent of respondents reported being sexually harassed at some point in their lives.

The proposed law provides protection to persons from sexual harassment in schools, universities, colleges and other places of learning, correctional facilities, places of safety or place for the custody of minors.

It also provides protection for persons in nursing homes or any other place for the custody of the elderly and a medical or psychiatric facility.

The showing of pornography or display of images or objects of a sexual nature and any other physical gesture whether verbal, non-verbal or visual conduct of sexual nature are also deemed as a sexual advance.

“Sexual harassment is not just a sexual advance. Sexual harassment is the making of an unwelcome sexual advance towards a person by another person which is regarded as offensive or humiliating by the person towards whom it is made or has the effect of interfering with the work performance of the person to whom the advance is made or creating an intimidating, offensive or hostile working environment,” Johnson Smith explained.

Debate on the bill is expected to continue in early October.

In July, lawmakers in the Lower House gave the bill the nod.