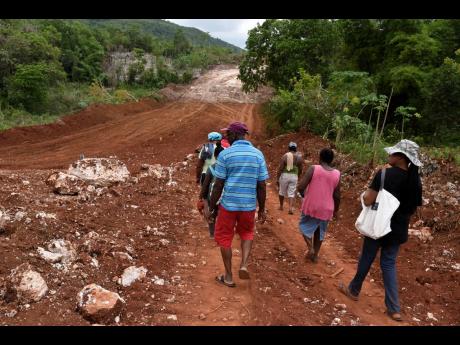 File
In this 2020 file photo, residents of Red Berry, Manchester walks along a section of the Wliiamsfield leg of Highway 2000 which is under construction.

As the May Pen to Williamsfield leg of Highway 2000 advances towards the parish of Manchester, businesses should be bracing for an uptick, but the traditional water woes that plague the parish may threaten the pace of economic growth that should...

As the May Pen to Williamsfield leg of Highway 2000 advances towards the parish of Manchester, businesses should be bracing for an uptick, but the traditional water woes that plague the parish may threaten the pace of economic growth that should spin off from the development of the road network and connectivity to other areas of the country.

Manchester has suffered for years with the many sections of the parish reeling from the lack of piped water. The parish’s notoriety among returning residents and its real estate appeal to members of the diaspora could be greatly improved, some businesses interests say, if the water challenges are addressed.

The National Water Commission (NWC) recently extolled its plans to improve access to the resource for the parish. But these improvements need to be made sooner rather than later, especially since the US$144-million May Pen to Williamsfield leg of Highway 2000, due to be completed by October 2022, will bring new opportunities – especially real estate purchases – to the parish, the business operators say.

The NWC said it plans to install a series of lift stations to bring water from wells located at Pepper in St Elizabeth into Manchester to ease the shortage in the parish, as well as replace major sections of the Greater Mandeville transmission and distribution pipeline network, President Mark Barnett said at a recent press briefing.

Phase one of the improvement project started in October 2019 and is scheduled for completion in January 2023 at an estimated cost of $3.5 billion.

But for real estate development company Moorland Development, which put out its first development over 18 years ago and for which there is still no piped water, the issue has meant loss of revenue and a five to seven per cent increase in development costs.

The water issues “reduce the market price that we could ask for a lot with water [readily] available. We could ask for 20 to 30 per cent more on the price,” Managing Director Carlton Maxwell told The Gleaner.

Lots in Moorland Manor, the company’s latest venture in Manchester, sold for between $5.5 million and $6.5 million.

“It makes it very difficult for persons to buy and build in these areas because one of the requirements for building is a large tank … that is a significant part of the investment that [purchasers] would have to spend on a house,” Maxwell said.

Managing director of C&D Construction and Engineering, Clive Wint, also told The Gleaner that his company has felt the pains of inconsistent or no supply of the commodity.

Both businessmen contend that the parish has missed and stands to miss even more investment opportunities if the water challenges persist.

“This is what is holding back a lot of development in Manchester. We are targeting people from the diaspora to invest in Jamaica and it is difficult to sell your property [to that segment] with these issues,” Wint said.

The businessmen reasoned that as the parish opens up with expansion of Highway 2000, the demand for real estate will see an even further uptick, but the lack of water hampers real estate development, ultimately slowing down economic growth for the parish.

“As for expansion, as more and more people move into this area, it creates a challenge that we are not really equipped to deal with. They buy and they expect water,” Maxwell said.

What is more concerning, the developers said, is that fact that they still have to bear the costs to install all infrastructural requirements despite not being able to secure water from the NWC.

“There is no reduction in the infrastructure cost although you are not getting the service,” they said.

For example, “We had to build a 100,000-gallon storage tank for Moorland Manor even with the knowledge that we were not getting any water,” Maxwell said.

“It is hampering investment,” Maxwell said, noting that purchasers are also intimidated because of the added cost of having to purchase water to construct their homes.

The National Housing Trust-developed Perth Housing Scheme in the parish is also plagued with water challenges. The NWC has also targeted this as an area to be remedied, Barnett said at the press briefing.

The NWC suspended connection of all new subdivisions to their system due to the water crisis facing Mandeville, but has since begun to lift water to supply the Perth development after discussions with the NHT.

The problem, however, is not “insurmountable” for one major developer.

“We have heard that the NWC has had plans for the Mandeville area for quite some time now. We understand it’s been many years but we imagine significant infrastructure and capital expenditure is required due to the terrain, but the water issue was not a turn-off,” Shani Dacres- Lovingdeer, head of operations at PROVEN REIT, said, noting the company’s interest in the parish was augmented by the expected spin-offs of the impending completion of the highway.

“It is important as a developer to be familiar with the challenges of wherever you are going to build,” she said.

The company has implemented its own interim water storage solution – a combination of tanks as well as rain harvesting for the multistorey development being undertaken on 2.7 acres of a nine-acre property next to MegaMart in the parish.

“It’s the first of its kind in Mandeville. This trumped the water issues, especially given the investment by the Government in developing the road infrastructure. There is value in getting in now,” she said.

The situation seems to be more of a stumbling block for the smaller operators.

Pointing to another of his projects – a 28-lot subdivision in the Newport area of the parish – Wint said he has had to hold off on selling the plots as “it makes no sense to push it”.

“Why should I sell you for you to annoy and nag me that you want water? So, it’s better to wait. The NWC lines passes there, but for years I have been applying but cannot get a connection,” he said.

He has already invested $13 million in the 12-year-old project.

“I should have been on my third submission now, but I can’t finish the first one,” he bemoaned.

One businessman in Mandeville proper has simply found “a workaround”.

“We ensure we have a good catchment to harvest our water supply … and we try to practise good conservation [so] we are not feeling the brunt of the water challenges,” Leroy Allen, owner of Technosoft Solutions, and who has operated two businesses in the parish for the past 15 years, told The Gleaner.

President of the Manchester Chamber of Commerce, Simone Spence Johnson, is also no stranger to the water woes of the parish, having been born and bred in the central Jamaica parish.

“It is a challenge … it disturbs the whole business process, depending on what type of business you are in,” she said.

The chamber is currently working to put a proposal together “looking at renewable energy and how we can inject technology to really have a permanent change in this matter”, said Spence Johnson, who was recently voted into the presidency.