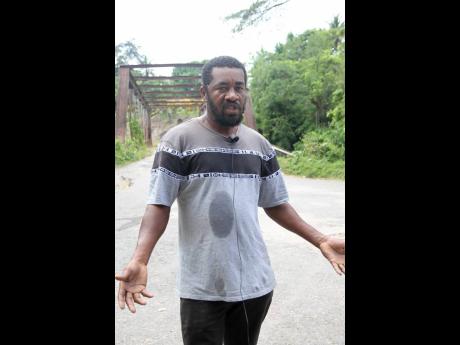 Nathaniel Stewart
Lennox Smith, a farmer from Brandon Hill, Clarendon, says residents are tired of the promises over the years and are now hoping for road repairs. 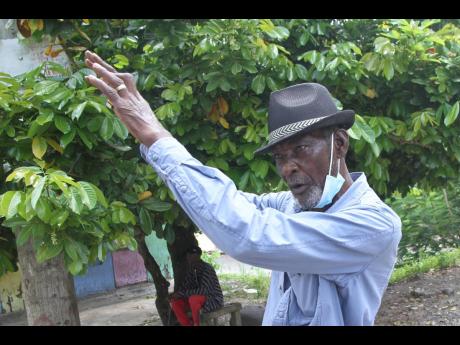 Nathaniel Stewart
Keith Benjamin says that should you become ill in the night, “dawg nyam yu supper!” because the few public passenger vehicles that ply the routes in Brandon Hill, Clarendon, don’t operate at night because of the bad road condition.
1
2

Residents of Brandon Hill, Clarendon, are fed up with the years of neglect meted out to their community and they want immediate attention to be paid to the bad roads there.

The Gleaner hung out at the unofficial taxi stand close to the Pennants Bridge and listened as tales of woes were shared by residents.

The road that leads from Pennants to Morgan’s Pass and encompasses Colonel’s Ridge leading to Kellits, offers a shorter journey. However, the poor condition of that road forces motorists to take the longer route to get to their destination.

For Keith Benjamin, who takes the taxi, it is a headache as only those with a vehicle who wants to chance it, drives that route.

“We have to go all di way around Monkey Corner and back round fi go a wi yard. A nuh one bag a road fi go a Kellits, just a few miles and you know how long that road nuh fix? Millions a years now ... from mi a bwoy and mi a ole man ya now,” he said, informing that the condition of the road has gotten worse over the years, making it a great challenge and expense in vehicle parts to navigate.

The alternative to getting home is a more expensive route at a cost of $300 dollars “fi go over the hill”, as opposed to paying $150-200 if the road were fixed.

For passengers who want to get home or leave their community to run errands, it also means a longer wait to get a vehicle to transport them.

For those who do business in the community, such as farming or those who have goods to be transported, Benjamin said the situation with the road affects their bottomline, because “di vehicle dem whey a transport di goods dem no normal and sometimes when dem do come, you haffi pay extra money fi di goods,” he said.

Pointing out that the situation is no joke, he said if someone falls ill during the night, then “dog nyam dem supper” as the chances of getting a taxi to transport them to the hospital are very slim.

“Believe me, nutten fi carry yuh down a hospital when it come night time. Dog nyam you supper cause nobody nah run a night, unless, of course, you pay X amount more,” Benjamin said.

Benjamin shared that when it rains so hard that the banking erodes, a tractor is used to push it off.

“All a di culvert dem, every Jesus ting full up. Bare hole ... serious ting! Sometime dem send man drive round come look, but drive round and look and nutten nah done nuh meck nuh sense! We well waan di road. If we nuh get di road, we soon have a lot of dead people,” he stated, even as he used the opportunity to beg the “bigger heads” to hear their cry.

Lennox Smith, a farmer from Brandon Hill, said it is very hard to see a big profit as his financial resources are used up to secure transport to get his goods to the market.

“Most times people want to go to market, but they don’t have a ride because di vehicle dem don’t want to come up here,” he explained.

For him, their long-standing plight has been ignored by both political parties.

“Is long time we nuh hear nutten from the two parties bout the road,” he stressed, adding that the bad road is putting a big dent in their profit and farming activities.