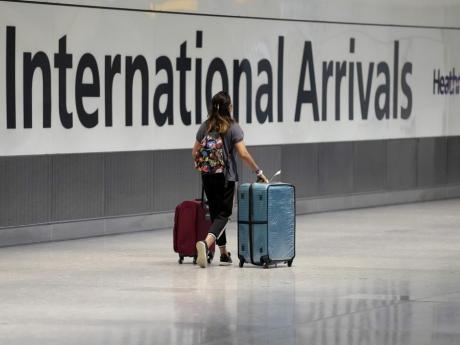 Baines: “This has nothing to do with AstraZeneca. There is no Astra Zeneca angle to this situation. If you were vaccinated with Pfizer or J&J [Johnson and Johnson], then, at the moment, the certification would also not be recognised. It is about the certification system and not any particular vaccine.”

The British High Commission has moved to address concerns raised by vaccinated Jamaicans regarding travel to the United Kingdom.

The UK does not recognise the vaccine code for Jamaica, causing locals who are fully inoculated against COVID-19 to be designated unvaccinated on arrival in that European country.

The majority of Jamaicans have been vaccinated with the UK-developed AstraZeneca.

Responding to queries from The Gleaner, a spokesperson at the high commission said that the non-recognition of Jamaica's vaccine code has to do with the UK's travel regime and not with AstraZeneca or any other vaccine.

The UK has a “traffic light” system that ranks countries as red, amber or green — high, medium or low risk from the coronavirus.

Based on the country's positivity rate and low vaccination, Jamaica currently falls in the amber category.

However, the country's fortunes are likely to change by October 4 as the UK is expanding the number of countries for which vaccination certificates are recognised.

“From 4 October, 17 more countries and territories are being added to that list, including some Caribbean countries,” Baines noted, although he did not mention Jamaica as one of the countries in the region slated to make the new list.

He pointed out though that the UK was working closely with Jamaica, noting that the country has provided 300,000 doses of the AstraZeneca vaccine which has been successfully used in England.

“This has nothing to do with AstraZeneca. There is no AstraZeneca angle to this situation. If you were vaccinated with Pfizer or J&J [Johnson and Johnson], then, at the moment, the certification would also not be recognised. It is about the certification system and not any particular vaccine.”

In the meantime, Jamaica's Minister of Foreign Affairs and Foreign Trade, Kamina Johnson-Smith has indicated that she had brought the issue to the attention of CARICOM last week, and will also raise it at upcoming bilateral meetings in the margins of the United Nation.

"The stoplight travel status is a function of our vaccination numbers, hospitalisations, variants and related considerations in Jamaica. There is some lack of clarity on the specific formula, but it is quite clear that these circumstances need to be improved for ourselves and for this reason,” she said in a statement today.

Johnson Smith shared that an expanded UK list of programmes has already been determined for October, and while the process is relatively new, the Ministry of Foreign Affairs has requested data from the Ministry of Health and Wellness to assist the UK Government in the review of Jamaica's vaccination programme.

“The travel status of the country is another reason why we all should be vaccinated in order to reduce the spread of COVID 19, serious illness, hospitalization and the development of variants. We need to improve the level of protection for ourselves, our families and the wider population. We are all in this together!”