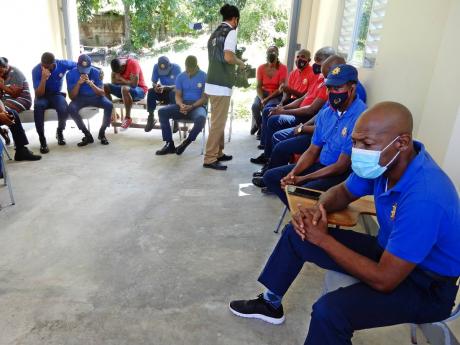 Carl Gilchrist
Some of the fire fighters, as they listen to McKenzie speak. 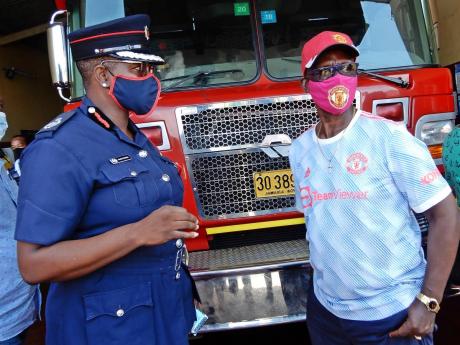 Minister of Local Government Desmond McKenzie, visited firefighters at the Ocho Rios fire station on Friday, to offer condolences to the men and women who recently lost two of their colleagues in a motor vehicle crash in Laughland, St Ann.

The two, Alex Williams, 22, and Stefan Walters, had dropped off a colleague at his home in Runaway Bay and were heading back towards Ocho Rios when the car crashed into another that was heading in the opposite direction.

McKenzie said he was committed to ensuring that the two men get a fitting funeral.

“I know two young men have gone and we have to ensure, like I said before, that their memories live on. I am committing myself as the minister to ensure that I do everything that is within my power to see to it that they have a fitting farewell,” McKenzie told the fire fighters who were on duty at the time.

Describing the circumstances that led to the deaths of Williams and Walters as “very unfortunate”, McKenzie said it has brought a cloud of darkness not only to firefighters in Ocho Rios, but other firefighters across the country.

He said the time is right to begin seeking alternative transportation to getting firefighters home after working long shifts, rather than have them drive themselves home.

“I think the occasion is right to engage the leadership of the brigade in some discussion as to how we can treat with situations that will prevent firefighters, after completing long shifts, to get home without them have to be sitting behind a wheel and drive. It is a discussion that has already started with the commissioner and I intend to have the board engage some more to see how best this can be done. We are not offering any token because two lives have been lost but we are saying, let us help to mitigate against any further loss of life under those circumstances,” the minister stated.

Additionally, McKenzie is proposing an honour roll, similar to what exists in some other organisations, to pay due respect to persons of the fire brigade who are so deserving. He has also pledged to give the Ocho Rios fire station a facelift.

“It is not much comfort, you can’t replace lives but at least you give the kind of recognition, which is due across the world in organisations such as this. The police has it, the army has it, and I’m going to be insisting that this becomes a part of the history of the Jamaica Fire Brigade (JFB),” McKenzie said.

He continued: “I have toured the location (Ocho Rios fire station) but as a mark of respect and to show some gratitude, we will, as soon as the necessary estimates are completed, we will have some face-lifting of the location, to allow those who are here to come into an environment that is conducive and at least take away some of the daily challenges they face working here.”

“So again, I want to extend my condolences and to urge Jamaicans to continue to say a word of prayer and to keep the men and women of the Jamaica Fire Brigade in their prayers as they go through some very challenging periods at this time.”

The minister was accompanied on his visit by Assistant Commissioner of the JFB Julian Davis-Buckle, Mayor Sydney Stewart and Councillor Genevor Gordon-Bailey.

McKenzie’s visit to the station stirred emotions among the firefighters, as, after he addressed them, he asked for persons who wanted to speak about their fallen colleagues.

District Officer Seymour McDermott was just able to control his emotions, commenting: “We eat together, we play together, we get on top of each other’s nerves together, if you know what I mean. When two members go down together, it affects everything. It will be a very long time to get over this, but it will not be the same.”

It was different for firefighter Donito Lawes, who, gripped by emotion, was only able to hang his head without saying a word.