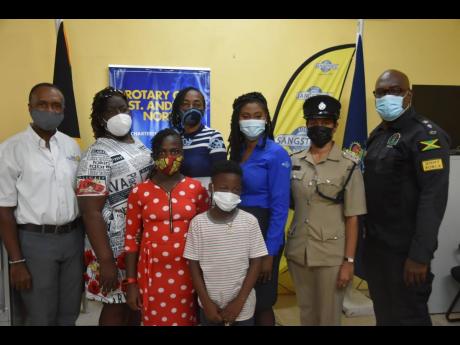 As part of the Rotary International’s Education and Literacy Month activities, the Rotary Club of St Andrew North has carried out a number of back-to-school projects at a total cost of $675,000.

“Our club is excited to engage in these initiatives for September as part of Rotary’s area of focus, which is to provide the resources for basic education and literacy in order to protect the welfare of our children”, said Kecia Taylor, club president.

Working in collaboration with the Jamaica Constabulary Force’s (JCF) Area 4 Civic Committee, the Rotary Club of St Andrew North provided back-to-school vouchers for 55 students, with each receiving $4,000 to assist with purchasing books and other school supplies from Sangster’s Bookstore. This initiative was carried out in partnership with the Area 4 Police Civic Committee; Rotary Club of College Park, Orlando; Sangster’s Bookstore; two Rotarians based in Orlando; United Way of Jamaica; and Transocean Shipping. The total cost of that project was $250,000.

In expressing gratitude for the club’s assistance, Senior Superintendent of Police Steve McGregor said: “It’s not just operational policing that will make a difference in our communities, but interventions like this. So the Area 4 police is grateful for the Area 4 Civic Committee’s involvement with educational programmes over the past 21 years. This year, we are grateful for the support of the Rotary Club of St Andrew North and its partners in this integrated approach to policing, which is critical in uplifting communities.”

During this month, too, the Rotary Club of St Andrew North Education Foundation awarded education grants to five students – three at the secondary and two at the tertiary levels. The grants ranged from $40,000 to $75,000 each, totalling $245,000.

In announcing the grants at a recent meeting of the Rotary Club of St Andrew North, Donald Patterson, director of the club’s Education Foundation, encouraged awardees to “strive for excellence, despite the challenges, as these awards demonstrate that where there’s a will – with perseverance – a way can be found.”

SCHOOL GETS WATER AFTER 10 YEARS

Another project was the reconnection of water supply to the Chetolah Mel Nathan Educational Centre, Hannah Town, which serves a student population of 184, ages three to 12.

According to principal of the school, Tamara Steele-Rowe, the institution was without water from the National Water Commission (NWC) main supply for over 10 years. She expressed gratitude to the club for facilitating water supply from the NWC mains in time for the start of the current school year.

“On learning that there was water supply from NWC in the adjoining community, representatives of the Rotary Club of St Andrew North investigated the matter and found that there was a blockage in the main leading into the school’s compound,” said Glaister Ricketts, past president of the club and an engineer by profession. He, together with the club’s immediate past president, Nakia Rowe, worked with a plumber and an NWC technician to open the line. In addition, new pipes were installed to take the water into the kitchen, which had operated for a long time without running water. To prevent a back flow into the main, the Rotary Club of St Andrew North also installed non-return valves on the water lines and upgraded connections to the existing water tanks, which previously served the school as the main source for water that was trucked in twice per week. The overall cost of that project was $180,000.