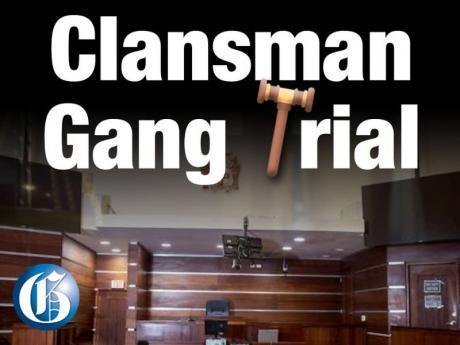 Technological difficulties have stalled  proceedings for the trial of the 33 alleged members of the Clansman-One Don Gang in the Home Circuit Court.

Chief Justice Bryan Sykes was forced to adjourn the matter shortly after court resumed at 10 o'clock this morning after the video connection in the main courtroom was unable to connect to the second courtroom.

Technical staff are still working to fix the problem.

One of the two main witnesses, a self- confessed member of the gang, was expected to start giving evidence this morning.

The 33 accused are being tried on an indictment with 25 counts under the Criminal Justice (Suppression of Criminal Organizations) Act and the Firearms Act, to which they have pleaded not guilty.

They are being accused of being a part of the St Catherine-based One Don Gang, which carried out a range of murders, conspiracies to commit murder, extortion, and arson throughout the parish between January 1, 2015, and June 30, 2019

The One Don Gang was reportedly established following a split of the Clansman Gang amid an internal power struggle between reputed leader of Clansman, Tesha Miller, and Andre Bryan, who allegedly was the top lieutenant of Miller.

Miller is currently serving a near 39-year prison sentence following his conviction last January on charges of accessory before and after the fact of murder in relation to the 2008 killing of Douglas Chambers, then chairman of the state-owned Jamaica Urban Transit Company.