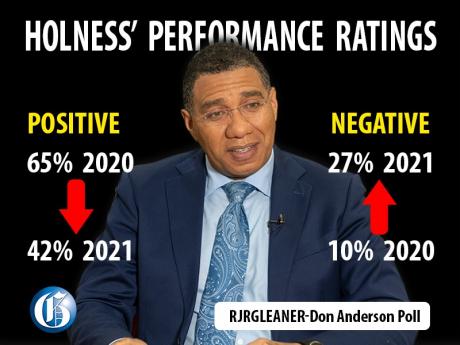 The Government has seen a 19-percentage point plunge in its performance rating in just over a year.

In the latest RJRGLEANER-commissioned Don Anderson Poll conducted from August 19 to September 3 this year, the government's performance rating dropped to 38 per cent from 57 per cent in July 2020.

The most recent poll was conducted among 1,003 respondents and has a margin of error of plus or minus three per cent.

The government's negative (poor and very poor) performance rating worsened from 12 per cent in 2020 to 28 per cent this year.

At the same time, there has been a further negative performance rating of the Jamaica Labour Party Leader.

Holness' positive (good and very good) performance rating of 65 per cent in 2020 is now 42 per cent.

On September 3, 2020, Jamaica held its 18th general elections since Universal Adult Suffrage with the JLP sweeping 49 seats to the People's National Party's 14.

The election happened in the middle of the COVID-19 pandemic

Based on the opinion polls last year, Tufton scored 59 per cent and this year, 33 per cent.

Finance Minister Dr Nigel Clarke was the next best with a rating of seven per cent down from 10 per cent.

McKenzie's six per cent rating last year has slashed in half this year.

Forty per cent of respondents did not name a member of the Government as the best-performing government minister.

Chang was rated poorly by seven per cent of respondents, while four per cent named Montague.

McKenzie, the local government minister was also named by three per cent of the respondents as a poor performer.

Some 61 per cent of participants in the poll did not name a worst-performing minister.