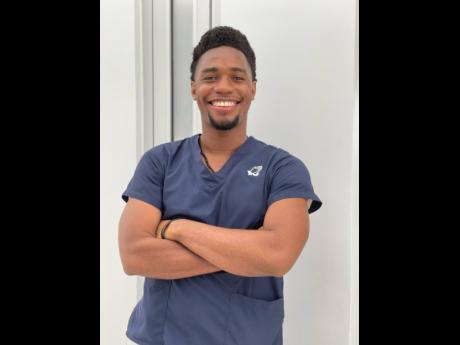 He said he often has to advise patients as well as visitors that he is, in fact, a nurse.

As one of just eight male nurses at the Type B hospital, Nurse Morrison is among a small group of men in the female-dominated field in Jamaica.

The registered nurse, who studied at the University of the West Indies (UWI) through a nursing programme offered at the Brown’s Town Community College, was also one of two males in his class and one of four in the school.

He said he would like to see more young men join the profession, which he describes as “very fulfilling and rewarding”.

In fact, he says that his three years as a registered nurse have been his most meaningful years.

The passionate healthcare provider said he believes that he was cut out for his current role.

“From the get-go, I was very compassionate, and while growing up I would always say nurses are born, not created. I felt as if I was born to be a nurse, so I said, why not, and here I am today,” Nurse Morrison says.

He said he has not had to deal with the stigma that he was warned about when entering nursing.

“I have always heard about the discrimination against male nurses, but I have never experienced that a day in my life. I get along quite well with my patients. It’s been a very good journey,” he said.

Nurse Morrison says he does not believe that any career should be gendered, arguing that “whether male or female, you should have freedom of expression in whichever career you choose”.

“Going into nursing, I won’t lie, in the initial stages, I didn’t know what to expect. But if you have love for people and you are passionate about helping others, if you are a man, if you’re a woman, be a nurse, or a ‘murse’ as they call us,” he said with a smile.

The registered nurse is currently stationed in the Accident and Emergency (A&E) Department at the St Ann’s Bay Regional Hospital, which he describes as “high-pace, high-adrenaline”.

“From you get to work, it’s just work until it’s time to leave and you get to appreciate what you do more than anything else because it’s life and death. So you can be the difference between going home and ‘going home’,” he pointed out, alluding to the fact that a harsh reality of the job is that sometimes, patients die.

“It is always difficult to lose patients, and it doesn’t mean that we didn’t try our best to take care of the patient, but when God is ready, He’s ready,” he said.

“We’ve seen young and old come to the hospital, and some of them meet their demise, but one of the greatest feelings, and I’ve had this feeling many times, is when the patients come in and they’re very ill and you know you care for that patient until he or she is able to walk out of that hospital,” he said.

“Sometimes you even see them on the road, and you can’t put a price on the feeling that you get when you see them, to know that you helped make a difference in their lives,” he adds.

In describing his typical daily nursing duties, Nurse Morrison told JIS News that the first task is to conduct a series of assessments of the patient.

“It starts with a general assessment, and then you pinpoint to whatever ailment the patient has. So, for example, if the patient has a respiratory problem, then we would focus on that. From there, you, basically, manage the condition based on the needs of the patient,” he said, noting that it includes administering medications.

He says that the patient is closely monitored as it is “important to be able to report on changes in the patient’s condition every step of the way”. He noted that a key role of the nurse is to be an advocate for the patient.

“If you notice something wrong, you advocate for the patient by contacting the relevant parties. It might be the physiotherapist, the doctor, or whoever is needed because the goal is to ensure that your patient is always all right,” he says.

As it relates to working with COVID-19 patients, Nurse Morrison admitted that at first he was afraid “because we started to hear about COVID and what it was doing overseas long before it came to Jamaica. I felt very scared but did not let on what I was feeling”.

He said, however, that he values the time caring for patients in the COVID unit and is committed to spending each day nursing them back to good health.

Nurse Morrison said he has absolutely no regrets about his career choice.