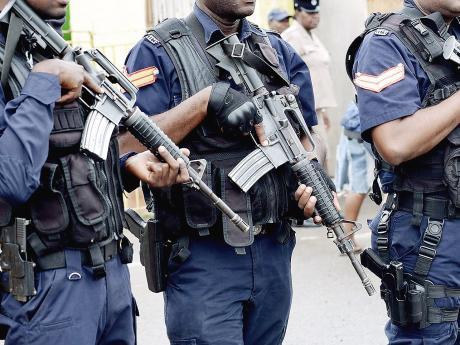 The police say the community has been experiencing criminal activities such as shootings and robberies – File photo.

They are currently being processed.

"We think that the police should be inside here to deal with the criminal dem dat ah tek over di place," a resident told The Gleaner.

"Some parts of this community are seen as a People's National Party strongholds and with the trial [Clansman Gang] going on, I am just hoping that ah nuh set dem start to tek inside yah," a bystander remarked.

"We want the police to keep up the pressure, but there must be sound investigations to properly prosecute the cases," said a taxi driver.

Deputy Superintendent Linroy Edwards, who holds responsibility for the division's operations portfolio, said Lakes Pen is under scrutiny due to criminal activities.

The Gleaner was told that despite the police having a checkpoint in the community, criminal activities such as shootings and robberies still occur.

"We went into the community in search of persons who are involved in criminal activities,” said Edwards.

"We will be sustaining the fight against crime all over the division."