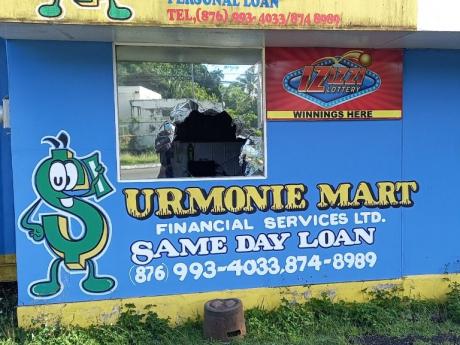 The police are probing a break-in at Urmonie Mart Financial Service in Portland on September 20, 2021 - Gareth Davis Snr photo.

The thieves broke a window to gain access to the premises.

The office was ransacked.

The police indicated that the crooks stumbled upon a vault in the main office of the building but were unable to open it as it was secured.

The police theorise that the criminals were searching for money.

The company's security camera system, along with wiring, was removed from the business.

Owner Paul 'Bigga' Young bemoaned that criminals have been creating havoc for businesses and residents in the parish in recent times.

Portland has seen a surge in crime, particularly robberies and break-ins.

Note: A previous version of this story incorrectly stated that the vault was damaged. We regret the error.