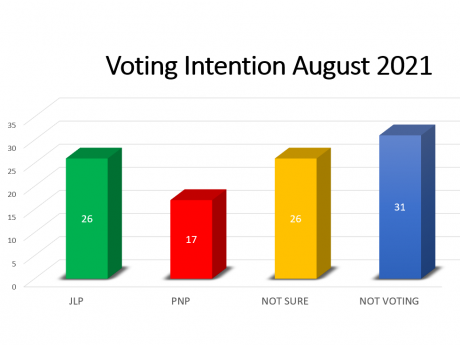 The poll was conducted between August 19 and September 3 among 1,003 respondents and has a margin of error of plus or minus three per cent.

The ruling Jamaica Labour Party (JLP) is ahead of the Opposition People's National Party (PNP) by nine percentage points.

The results of an RJRGLEANER-commissioned Don Anderson poll released Wednesday afternoon indicated that 26 per cent of electors would mark their ballots for the JLP while 17 per cent indicated a preference for the PNP.

Although more people are in favour of the JLP, an equal amount, 26 per cent, said they were not sure which party they would vote for.

Thirty-one per cent of people polled indicated that they would not vote.

The latest results represent a three-percentage point narrowing of the gap between the country's two major political parties since last year.

In August 2020, 37 per cent of voters indicated they would cast their ballot for the JLP while 25 per cent said they would back the PNP.

Over the one-year period, there has been an increase in voter apathy.

The poll was conducted between August 19 and September 3 among 1,003 respondents and has a margin of error of plus or minus three per cent.

Forty-two per cent of people who would vote for the JLP said their decision is based on the party's ability to better manage the country.

Only 21 per cent of PNP supporters would vote for their party on similar grounds.

Just under 40 per cent of JLP backers would vote on the basis that the party will do a good job.

Further, 31 per cent of people would put their X beside the bell because the JLP is the best party and 26 per cent because they are traditional supporters.

Another 20 per cent said the JLP has the country's interest at heart as well as better leaders, while 24 per cent are of the view that Jamaica has been progressing under the JLP's leadership.

Fourteen per cent of respondents reported that they would vote for the JLP as the party has been handling the pandemic well.

Jamaica recorded its first case of COVID-19 on March 10, 2020, and the country is now in a third wave of the pandemic.

Meanwhile, the main reason people would cast a vote in favour of the PNP is that they are traditional supporters.

Another 28 per cent of respondents want to see what its leader Mark Golding can do, while 24 per cent reported that it is the best party.

For 13 per cent of respondents, the PNP has the country's interest at heart while 12 per cent believe the country has always progressed under PNP leadership.

Ten per cent of participants would vote for the PNP on the basis that it is time for a change in leadership.

Among the less common reasons people would vote for the PNP are that they have personally benefited and they believe the leaders have a good vision.