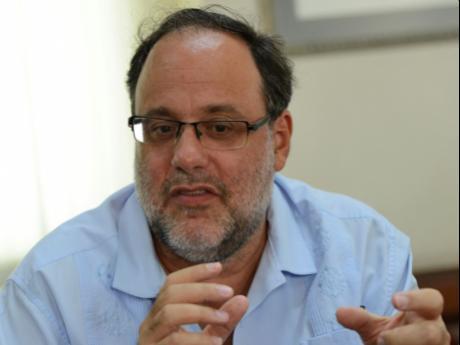 Golding: "When they brought the bill to parliament to amend the act I spoke out against it because I identified that it was going to cause abusive situations and injustice against the people." - File photo.

Leader of the Opposition Mark Golding is calling for the Government to move to implement the ticketing system under the Disaster Risk Management Act (DRMA) so as to avoid Jamaicans facing hefty fines.

This follows complaints from several people who were fined up to $200,000 for failing to wear a mask and breaching curfew restrictions when they appeared before the St Thomas Parish Court on Wednesday.

The breaches were committed in August.

Speaking with The Gleaner, Golding criticised the fines as an injustice to Jamaicans.

“This has all arisen because of a serious defect in the way that the government amended the DRMA earlier this year. When they brought the bill to parliament to amend the act I spoke out against it because I identified that it was going to cause abusive situations and injustice against the people. What they did was, firstly, was to change the 2015 Act so that any breach on an order made by the Prime Minister under the DRMA was a criminal offence,” he said.

The Houses of Parliament passed legislation for the introduction of fixed penalties for persons who are deemed to be in breach of certain aspects of the DRMA.

The fixed penalties, which are issued in the form of tickets, must be paid within 30 days, failing which a summons would be issued by the court for the person's arrest.

However, the ticketing regime has not been implemented and persons are still being locked up for offences such as failure to wear masks.

A person who is brought to court under the DRMA and convicted before a parish court is liable to a maximum fine of $1 million or to imprisonment not exceeding one year.

The opposition leader said that the situation has to be rectified, saying the ticketing system needs to be introduced and that the use of criminal law in enforcing the measures under the DRMA be suspended.

Further, he is suggesting that new sentencing guidelines be considered.

“The judges have a sentencing group that provides guidelines on setting sentences. The Chief Justice should rally that group together and issue a guideline for the parish judges that would cap the fines for these minor infractions at a much lower and modest level,” said Golding.

More than 18,000 persons have been prosecuted under the DRMA since last March when Jamaica recorded its first case of COVID-19.