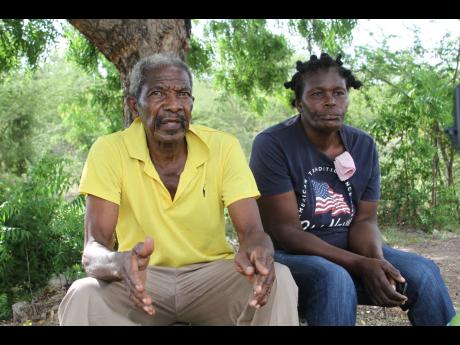 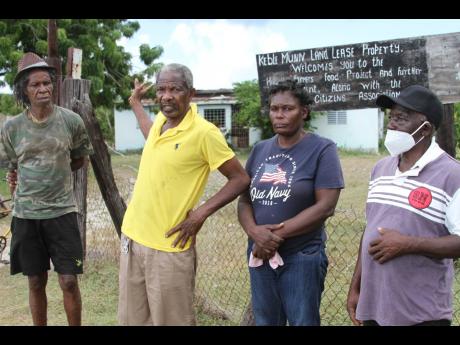 Nathaniel Stewart
Carlton Campbell (second left), of Project Land Lease, Raymonds Clarendon explains the terms of a lease agreement signed in the 1970s between residents and then Minister of Agriculture Keble Munn, to lease over 700 acres of land to 220 farmers for 49 years. Looking on from left are: Micheal Moore, Mitchell Bryan and Winston Burell.
1
2

Residents of Land Lease, Raymonds, Clarendon, have expressed concerns regarding the length of time it is taking for them to have their titles, even questioning if there is any plan to ensure they get the land to purchase.

Carlton Campbell, an advocate and one of the more than 300 persons living at the Keeblemont Farm (Land Lease), said from 1976-77, they leased the land for a period of 49 years with the option to renew the lease or freehold.

“From 1997, there was another property than this property in Clarendon that was giving trouble, one that was up for freehold, and from there, everything starts to go downhill,” Campbell noted.

Not having a title, Campbell said, he along with others living on the land cannot make any plans, or make applications for utilities such as water. Campbell also expressed concern regarding the fact that the last time settlers tried to pay the lease on the land at the Rural Agricultural Development Authority office in May Pen, they were advised by the agents that they were no longer collecting monies from them, noting that the National Land Agency would correspond with them.

“Up to today we have not received any correspondence from National Land Agency (NLA) regarding what is happening,” he noted.

The Gleaner made several attempts to get a comment from the NLA. However, up to press time a response was not received,

Mayor of May Pen Winston Maragh, in responding to the concerns, said a meeting was held at Landlease with the member of parliament for the constituency, Pearnel Charles Jr, and the Sugar Company of Jamaica Holding (SCJH), with a resolution made that SCJH would proceed to have the lands transferred to them. “So, before they do so, they have to do the necessary surveys, apply for subdivision approval from the municipal corporation, as without subdivision approval you can’t get titles from mother titles because that’s one huge 700-odd-acre of property,” Maragh noted.

Pointing out that the process has already started, he said the SCJH is dealing with matters in every parish where there are cane lands and non-cane lands.

“So, it is going to take a little while. So we have been in discussion with them, every meeting that I have with them, I raise Raymonds Land Lease and it is in process, the legal department of SCJH is working on it as well as their surveyors, but they have to put together the subdivision drawing and all of that so that they can submit for approval … that’s where we are with that property,” Maragh noted.

Responding to residents’ concerns on being shafted in the deal, Maragh said no one is trying to “work around them, they just have to be patient”.