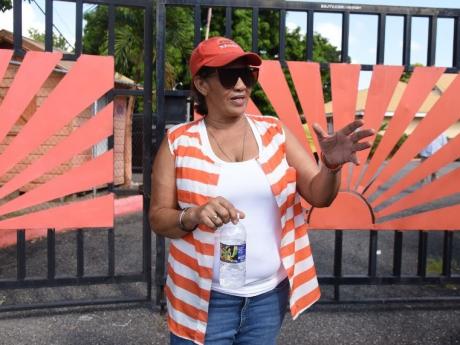 Cross: “All I want is for the People's National Party to get back some relevance...and to show Jamaica that we are an opposition party preparing to run this country again. Right now, we are unable to prove to the Jamaican people that we are doing that." - Ian Allen photo.

People's National Party (PNP) activist Karen Cross and five others staged a protest outside the chained gates of the party's headquarters on Old Hope Road in St Andrew today demanding a change in leadership.

“We want the resignation of Mark Golding and Dayton Campbell. There is no record to show that they have made a very honest and humble, fruitful and trustworthy effort to unite the party,” Cross asserted.

Noting that she is not promoting any party member, Cross said the PNP needs a leader who is capable of bringing all camps together.

“All I want is for the People's National Party to get back some relevance...and to show Jamaica that we are an opposition party preparing to run this country again. Right now, we are unable to prove to the Jamaican people that we are doing that,” she said.

Cross said her intention was to stage a peaceful protest and accused the party leader of organising persons from his constituency to show up at the protest and have the gate closed.

More than a dozen PNP supporters, some clad in hats and shirts with Golding's name on them, were on the grounds of the headquarters.

“Our focus has not changed, gate lock or not. It is clear that Mark Golding and Dayton Campbell want confrontation, which we are not going to give them because we are here to peacefully protest the Mark Golding-led administration,” Cross said.

Just over 30 minutes into the protest, councillor Eugene Kelly opened the gates, inviting Cross and her protesters in but she declined.

Cross said she was not concerned about the handful of people who turned up to protest alongside her.

“I don't care. As I said from the beginning, I will be here and if five people join me, that's fine,” Cross said, adding that the number of people will not change the weight of the message.

PNP general secretary Dr Dayton Campbell refuted her claim, arguing that the gate was closed for crowd control purposes as the protest was mobilised via the media and social media.

“We don't know if this mobilisation would have gotten more support than it has actually gotten. If they had brought a bus of persons here, should we just allow those persons to come inside and have the place packed with persons? No, that wouldn't have been wise. So the discussion was that in order for us to control the crowd, we would limit the gate to just pedestrian traffic,” Campbell explained.

He added that vehicular traffic was restricted to staff.

Campbell maintained that Cross did not use the internal channels available to communicate and that PNP leaders came prepared to invite her and the protesters to the conference room for a discussion.

“This constant internal fighting and tearing down of each other doesn't add anything to the process. I think the people of the country, even those who are not sympathetic to the PNP, are beginning to get frustrated by it because it allows for the Government to go on unimpeded and for them to almost become arrogant and do whatever they want to do,” he said, adding that the opposition has to take a serious decision about the path it wants to pursue.

Campbell said if the PNP wants to be viable, it must work towards unity.

The general secretary said “decades of problems” cannot be solved in a matter of days, as it requires long, committed work as well as truth and reconciliation.