American and Southwest airlines forecast growth for Jamaica despite pandemic 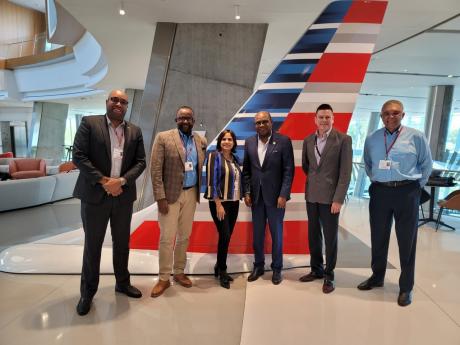 Despite slowing global travel demand, Jamaica is seeing the opposite from one of the world's biggest carriers, American Airlines, which has announced plans to add three new flights between Philadelphia and Kingston.

The US carrier is also sweetening the ride by adding its top-of-the-line 787-Boeing Dreamliner aircraft to the route, with the hope of bolstering arrivals between several major US cities - Dallas/Fort Worth, Miami, Philadelphia - and Montego Bay in anticipation of increased demand.

Jamaica has not been spared by the onslaught of the pandemic, with many hotels reporting massive cancellations in recent weeks as a result of travel advisories from both the UK Government and the US Centers for Disease Control (CDC).

But, tourism stakeholders are not about to sit on their laurels and play dead, and this was evidenced by a high-level meeting with American Airlines executives, the Jamaica Tourist Board and the Ministry of Tourism officials in Dallas, Fort Worth, Texas, US on Thursday morning.

Coming out of the meeting, Jamaica's tourism minister, Edmund Bartlett, said American airlines' assessments of the destination reveals growth prospects in the coming weeks, prompting the company to be proactive, introducing new, larger wide-bodied 787 planes on several key routes by November, weeks ahead of the start of the winter tourist season.

Already, the airline is the largest mover of people in and out of Jamaica.

“The addition of larger planes to the island this winter speaks to the confidence that the airline has in Jamaica and the expected demand for travel to the island. We are certainly excited by these positive developments and we look forward to welcoming many more visitors in coming weeks and months,” said Bartlett.

American Airlines was not the only carrier that the Jamaican team met with.

Coming out of that meeting, Southwest informed Bartlett that the airline's flight operations into Montego Bay in the coming weeks are very close to pre-COVID 2019 record levels.

This signals increased demand from Jamaica's number one source market.

Southwest is one of the largest airlines in the United States and is the world's largest low-cost carrier.

Southwest's senior director for strategic planning and airline partnerships, Steven Swan stated that Jamaica has been thoughtful, clear and easy to communicate with and boasts “good load factors”.

The airline's executives also stated that while the Delta variant of COVID-19 had caused a dip in domestic and international travel demand, the company continues to perform well and is very confident about future growth.