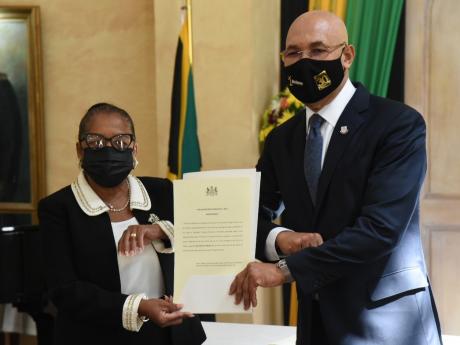 Governor-General Sir Patrick Allen in congratulating Golding reminded her that she should serve without prejudice to all the of St Catherine.

Businesswoman Icylin Golding has been sworn in as Custos of St Catherine.

She received her Instrument of Office from Governor-General Sir Patrick Allen at King's House on Friday morning.

The Governor-General in congratulating Golding reminded her that she should serve without prejudice to all the of St Catherine.

“Your swearing-in carries with it an air of anticipation, which is not unusual for new journeys. You, however, have the example and the legacies of former custodes, your senior custos and 12 other colleagues who are willing to support you as you take up this new assignment,” he added.

Golding has pledged to continue the work of those great custodes who served before.

The main role of the Custos is to represent the Governor-General as the first citizen of the respective parish.

They engage in activities that promote the rule of law, public order and civic pride.

He or she is also responsible for recommending and swearing-in Justices of the Peace and for supervising the execution of their legislative functions.