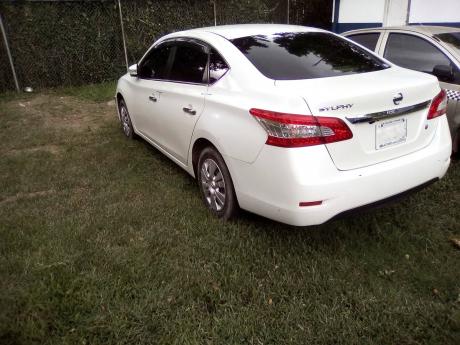 Rasbert Turner
The motor car in which the two goat kids were found.

It was the maternal connection between a goat and its young that assisted residents of a St Catherine community to nab suspected goat thieves.

Three men were arrested and a motor car seized by the Guanaboa Vale police in an incident in Bendon district, Kitson Town, last Thursday. The men were held when they were caught with two goat kids. The animals were allegedly found after alert residents accosted the men, who had been seen loitering in the area. The mother goat allegedly kept sniffing around the vehicle, which further raised the residents’ suspicions.

The kids were allegedly found in the trunk of the vehicle. Residents then reportedly called the police.

The police confirmed that at about 1:30 p.m. last Thursday, the men were seen in the area. They reportedly stole the goats and placed them inside a Nissan Sylphy motor car. But they were intercepted by alert residents and the police.

Police investigators believe that they have made a breakthrough in the goat-stealing racket. Sources say that within a one-week period, more than 20 goats, valued at more than $1 million, were stolen within the Kitson Town area.

“We find that these farmers are hardly reporting these matters,” a senior investigator said. “We take it very seriously and need the reports for us to act in a timely manner.” The cop also used the opportunity to warn persons to do thorough background checks when renting their vehicles.

“This is a rented vehicle. Owners need to do more checks and balances to be sure that the customers are genuine,” an investigator said.

The men were to be questioned in the presence of their attorney before charges are laid against them.