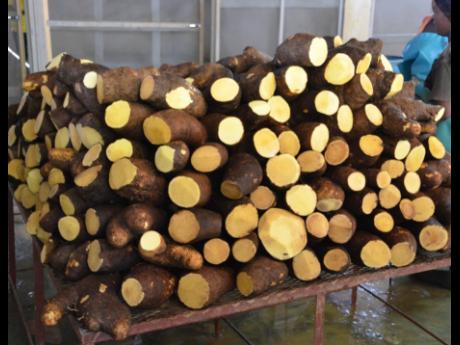 While they produced 70 per cent of the US$10 million worth of yams that were exported from Jamaica last year, yam farmers in Trelawny are still in a quandary as the yam house, which was established as a hub to drive their business, is now out of operation, leaving them without a place suitable for high-volume storage.

“We are basically where we were 10 years ago when we had a much-needed produce but no storage and no guaranteed market,” said Shawn Frater, a young farmer from the flourishing southern Trelawny yam belt. “The Government is urging us to farm, but where is the incentive to farm when we have no storage area or market?”

In 2011, the Ministry of Agriculture, in a bid to open up new opportunities for the farmers in Trelawny, invested J$16 million in establishing the nation’s first official yam house in the Wait-A-Bit community. In the initial stage, it met the farmers’ need for the storage of yam, which was destined for the export market.

However, as time progressed, activities at the yam house gradually ground to a halt as a lack of water rendered it all but useless as it was not able to meet the need for which it was created.

“The operators of the yam house would buy the yam from us. Now that it is closed, we are once again thrown to the mercy of exporters,” a female farmer told The Gleaner. “For every 100 pounds of yam they buy, we have to give them an extra 40 pounds.”

Interestingly, despite the challenging situation the farmers have found themselves in, they are still doing extremely well in producing for the export market.

“Jamaica exported US$10 million worth of yam in 2020,” Ann-Marie Brown, the deputy parish manager for the Rural Agricultural Development Authority, told The Gleaner. Of that amount, 70 per cent was produced by Trelawny farmers.

Last year, Lincoln Nicholson, representing Fairfield Farmers Group, leased the house from the Ministry of Agriculture and Fisheries with a view of revitalising its operations. However, the continued absence of water continues to be an impediment.

“We have leased the property to deal with the packaging of agricultural products. Our ambitions are hampered by the lack of potable water. We have been promised that water would be available in a short time. It is still to happen,” said Wayne Smith, the councillor for the Wait-A-Bit division.

If the National Water Commission keeps its promise to provide the yam house with water within two months, the farmers could once again have the services of the yam house.

“The water supply needed will be in place in another month or so,” said Smith. “The National Water Commission and Rural Water have an ongoing project to provide water for the entire area. Soon the water they need will available in abundance.”

While he is aware of the plans to bring water into the Wait-A-Bit area, Nicholson said based on the many broken promises over recent years, he is cautiously optimistic.

“We have been hearing that for some time now,” said Nicholson. “I hope that this time it will be so.”