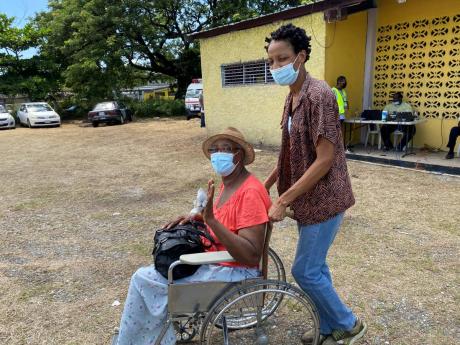 Ainsworth Morris
Wheelchair-mobile Rosabelle Campbell with her daughter, Lavern Campbell, at the Pembroke Hall Community Centre after being vaccinated with her first dose of the AstraZeneca vaccine. 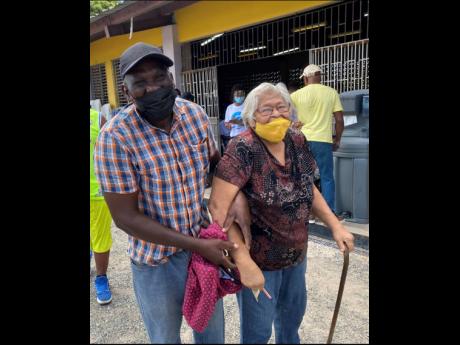 Ainsworth Morris
Carolyn Findlay (right) being with her husband, Winston Findlay, after she got inoculated with the Johnson & Johnson vaccine.
1
2

Seventy-eight-year-old, wheelchair-bound Rosabelle Campbell waited months on her doctor to give her the green light before taking the AstraZeneca vaccine last Friday.

Campbell was in the first batch of 10 persons to receive the AstraZeneca vaccine at the Pembroke Hall Community Centre in the morning, and among numerous wheelchair-mobile persons who turned up for the jab at that location.

She told The Gleaner that she wanted to take it some months ago when it just arrived in the island, but, like many persons her age and older with underline illnesses, she had to wait on her doctor to allow her to take the jab.

“I was waiting for the doctor to give me an ‘okay’. When he checked my file [during] the last attendance, he said he thinks I’m okay to have it, so I decided to come,” Campbell, who was very chirpy unlike many others her age, said.

Campbell said she was excited when her doctor said yes.

“I don’t really want to catch the disease, because I hear how it killed a lot of people; and if this vaccine is to prevent you from catching it, why don’t you come and get it?” Campbell, who said she used to cook for years at the Immaculate Conception High School before retiring, said.

She said she is diabetic and is now allergic to numerous things.

Her daughter, Lavern Campbell, who was with her to take the first shot of the vaccine as well, said she decided to wait on her mother to take her first shot.

“I’m the one daughter, and the one who takes care of my mom. I go with her everywhere. I am her caregiver and that is why I decided to come, too. I have to be healthy to take care of her,” she said.

Unlike Campbell, 80-year-old, Carolyn Findlay, who was seen walking with a stick into the Pembroke Hall Community Centre, opted to take Johnson & Johnson because she does not want to return for a second dose.

Her other reason for not taking the AstraZeneca vaccine when it became available earlier this year, was that she could not walk until recently.

“I fell down couple years ago and my hip is damaged,” she said.

Additionally, unlike Lavern, Findlay’s caregiver, who is her husband, Winston Findlay, did not take the vaccine.

Numerous wheelchair-bound persons were queued at the Pembroke Hall Community Centre at 9 a.m. when the nurses opened for inoculation at the location.

David Clarke, who has been wheelchair-bound for 25 years after being involved in a motor vehicle crash in 1996, took the Johnson & Johnson vaccine.

“I intended to take the vaccine but the location was too far, so when I heard it was at Pembroke Hall Community Centre, I decided to come,” he told The Gleaner.

“I took the Johnson & Johnson because it’s a single dose and I won’t have to come back and join the line [for a second dose],” he added.

Prime Minister Andrew Holness, who visited the location, thanked the healthcare workers for inoculating over 100 persons before he arrived, and thanked those who were in attendance for the inoculation.

Nigel Clarke, member of parliament for St Andrew North Western, also thanked the over 100 people who went to Pembroke Hall Community Centre for taking the bold step of showing up for vaccination.

“It’s good to see the turnout today. Everyone here has made the right decision to look after your health and I applaud you for that,” Clarke said.