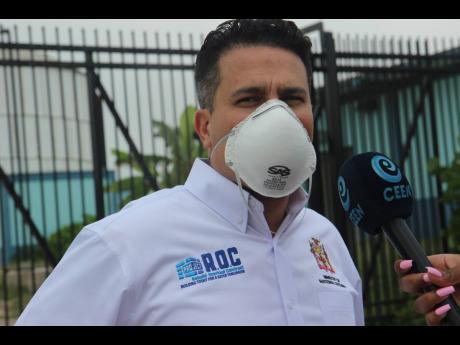 The National Security Ministry has remained silent on a claim by former United States Ambassador to Jamaica Donald Tapia that a thorough background check was done on Cabinet Minister Daryl Vaz whose US visa was revoked in 2019.

Tapia, who was the top US diplomat in Kingston between August 2019 and January this year, said a background check conducted by local and US authorities cleared the energy, science and technology minister of any wrongdoing.

Vaz's visa was revoked in November 2019 without explanation.

READ:  Vaz gets back US visitor's visa with rare waiver

Tapia said that following the revocation of Vaz's visa, he reviewed his case at the request of Prime Minister Andrew Holness, whom he said was considering Vaz, then a Minister Without Portfolio in the Office of the Prime Minister, for a very important ministry.

The former ambassador, who lobbied dozens of US senators for Vaz's cause, said that US and Jamaican authorities had cleared Vaz in multiple probes. Those claims have not been independently verified.

During this morning's press conference of the Crime Monitoring and Oversight Committee, The Gleaner asked Minister without Portfolio in the Ministry of National Security Matthew Samuda if Tapia's claim could be substantiated.

However, Samuda did not answer the question.

Opposition Senator Peter Bunting was also asked about claims by Tapia that he, during his time as national security minister, requested that the Major Organised Crime and Anti-Corruption Agency (MOCA) investigates Vaz.

He, too, did not respond.

Bunting, last night rejected all accusations relating to his role in the revocation of Vaz's visa.

The full text of this morning's exchange is below.

The Gleaner: Minister, can you confirm that security checks were done regarding Minister Vaz as indicated by former US Ambassador Donald Tapia and in light of the flagging of Minister Vaz's visa will there be further investigations?

Senator Bunting, the former US ambassador has said during your tenure as national security minister you asked that MOCA investigate Minister Vaz. Is the former ambassador lying?

CMOC host: I understand Kimone and I'm sure the minister and Senator Bunting would be happy to respond to you. I going to ask whether we could take that offline or perhaps at the end. I'm sure you're able to connect with them because I do know that if we start that conversation we're going to derail a little bit from the discussions that we wanted to have today.

CMOC host: So, Kimone, if you had another question related to this, we would take that. If not, you could connect with Senator Bunting and Minister Samuda after this if you don't mind.

The Gleaner: It's not. I think that they are fitting in light of what we are discussing right now.