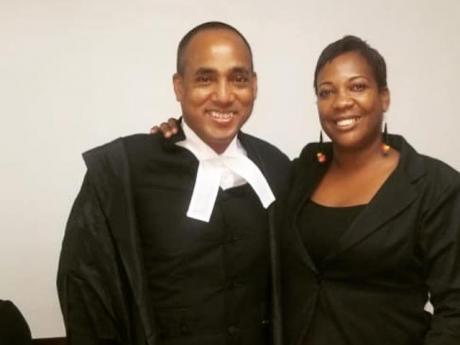 A happy detective constable Alecia Jones (right) shares a moment with her attorney Queen’s Counsel Peter Champagnie after she was freed of murder in the Home Circuit Court on September 27, 2021. Jones was freed after almost 11 years – Contributed photo.

Detective constable Alecia Jones is happy that she is finally cleared of a murder charge after almost 11 years but she has many disappointments.

One of her disappointments is that her father did not live to see her being freed of the offence.

According to her, the stress her father suffered during her ordeal caused his death.

Yesterday, the prosecution offered no evidence against her after ballistics tests conducted both locally and abroad confirmed that the results were inconclusive that she discharged her firearm during the shooting incident.

Jones along with two policemen and a policewoman were charged with the murder of Trevor Edwards, who was shot and killed on November 16, 2010.

The allegations had stemmed from a high-speed chase of an unlicensed taxi in which Edwards was a passenger and a police party consisting of four cops including Constable Jones in an unmarked service vehicle.

It was reported that the police party had signalled the driver of the taxi to stop but he disobeyed the order.

When the taxi came to a stop, Edwards was found suffering from gunshot wounds.

He later succumbed to his injuries.

Following investigations, all four cops were charged for the murder of Edwards.

The case continued against Jones.

Queen's Counsel Peter Champagnie, who represented Jones, explained that the initial ballistics report presented suggested that the bullet that killed Edwards came from his client's firearm.

Last year, Champagnie asked that the firearm findings be re-evaluated because of his client's insistence that she did not fire her weapon.

The subsequent test results revealed that there was insufficient ballistic evidence to link the firearm with the crime.

Following the startling revelation, the Independent Commission of Investigations (INDECOM) decided to have a ballistic expert in the United State assess the results and in August last year confirmed that the test was inconclusive.

Based on the findings, the prosecution yesterday in the Home Circuit Court offered no evidence.

Speaking with The Gleaner after her acquittal, Jones said the murder charge left her very depressed and stressed.

She said she could not travel abroad because there was a stop order.

She said she did odd jobs such as being a security guard and working on a construction site to survive.

During her long wait to gain her freedom, she said she decided to study law, which saw her obtaining a Bachelor of Laws with second class honours from the University of London.

“It was while working on the construction site that I had to be sitting at times in the sun and dust studying for my degree,” she disclosed.

She said that she is now going to apply to the Norman Manley Law School to complete her studies to become an attorney-at-law.

It was the case against her, she said, that had prevented her from applying.

She said being a lawyer will assist her tremendously on the job.

Jones, who said she is from humble beginnings, has expressed gratitude to Champagnie and family members who encouraged her when she felt hopeless.

“My lawyer did not only help me legally but was there for me mentally as well, always encouraging me,” she said.