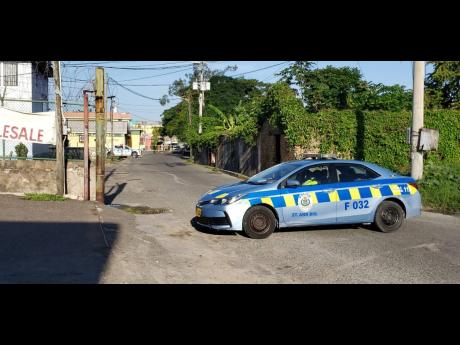 Contributed
Police officers close off a roadway in St Ann’s Bay, St Ann, on Saturday following the discovery of a decapitated body in the town. The alleged perpetrator was also shot dead.

Residents of St Ann’s Bay in St Ann were sent into a state of shock on Saturday morning, when news broke that a man had been beheaded in the town.

The incident reportedly occurred before daylight, close to the transportation centre in the seaside town and involved two homeless men.

The alleged perpetrator, known only as ‘Soljie’ and was said to be of unsound mind, was later shot dead by cops after he reportedly attacked a member of the police team which had arrived to conduct investigations.

The beheaded victim was known as ‘Nutsy’.

Deputy Superintendent Kevin Francis, who is in charge of operations in St Ann, told The Sunday Gleaner that police received information that a headless body had been seen in the vicinity of the transportation centre and a team was dispatched to the location and a head was seen.

“Subsequently, an operational response was formulated and the police went in search of a man said to be of unsound mind, who is accused of chopping the head off the body of another homeless person in the transportation centre,” Francis said.

He added that on the arrival of the police at a building close to the transportation centre, the suspect set fire to a building with himself inside.

The police’s attempts to get the suspect to exit the building were unsuccessful until fire brigade responded and put out the fire.

About 6:15 a.m., Soljie allegedly attacked a member of the police team and was shot by another officer in an effort to save his colleague, Francis revealed.

He was rushed to the St Ann’s Bay Regional Hospital, where he died while being treated.

The Independent Commission of Investigations was contacted and is said to be conducting probe into the shooting.

Francis described the situation as unfortunate and expressed relief that no other life was lost during the incident.

The events come after a September 23 incident in Linstead, St Catherine, where a man believed to be mentally ill killed a cop as he walked along King Street.

The attacker, who delivered a fatal blow by hitting Detective Constable Paul Gordon in the head with a stone, was subsequently shot dead by police after he turned on them when they sought to apprehend him.