Despite RAMI and prepaid metering, electricity theft still a scourge 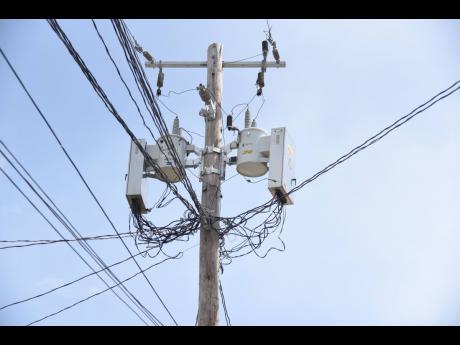 Despite pilot projects instituted by the Jamaica Public Service Company (JPS) to stem the illegal extraction of electricity, the problem still continues to haunt the company.

According to the JPS, in July of 2014 when the electricity regularisation pilot project was launched in McGregor Gardens, east Kingston, 84 per cent of the electricity delivered to the community was illegally extracted.

The electricity supplier said partnering with the Jamaica Social Investment Fund (JSIF) to introduce a prepaid metering system and a Residential Advance Metering Infrastructure (RAMI) led to some 230 legal connections in the community.

But even with these systems that cost the company $32 million, as of October 2021, 63 per cent of the electricity delivered to the community is illegally extracted.

Residents in the area told The Gleaner that the JPS has not lived up to what was promised when they met with the community to install the system.

“We were told that with the prepaid meter we would be put on a flat rate, and this is not so,” said a resident who gave her name as Monique.

“How I know that the JPS not living up to what they said? When the prepaid electricity just came in, I used to get 84 kilowatts for $2,000, but now mi only get 35, that’s why we haffi tief it,” she declared, adding that the application of GCT on prepaid purchases is another burden.

Monique said they are also experiencing regular power outages now, which was not the case in the past when the prepaid system was first introduced.

Another resident revealed that even with the RAMI system that she got, the high cost of electricity forced her to steal the utility.

In the Majesty Gardens community, where the JPS invested $64.4 million to introduce a similar system, in partnership with USAID, JSIF and the University of Technology, illegal extraction of electricity has not ceased.

The company said in 2016, more than 80 per cent of the electricity delivered to the community was lost to theft.

According to the energy provider, direct intervention in the community ceased in 2019 and while some customers maintained their prepaid arrangements, illegal usage has trended back up.

Robert Taylor, 64, a resident who has lived in the community all his life, said he was happy when the system was introduced because it made him a legal JPS customer.

“I feel good that I didn’t have to be looking over my back, and paying people to connect illegal light,” he told The Gleaner.

Taylor said illegal connections cost a lot because it caused damage to a lot of appliances, but now he can just go and get electricity and control how he uses it.

“This is the best thing for us down here, I can sleep in peace knowing that I am not on thiefing light,” he said.

Alton Simmonds said it is the best system he has seen and he thinks whoever developed it should be duly recognised.

“This system teach me how to save, I know I have to turn off the lights when mi nah use them and when the fridge freeze up, mi have to plug it out so mi nuh have a problem,” he said.

But some residents were more concerned about what they say is a reduction in the amount of kilowatts they now receive for the same amount of money.

“The only thing is mi a get less fi mi money and this cause me to spend up to $8,000 per month,” said Linton, who operates a bar.

Some residents insisted that they did not wish to steal electricity, but because of the cost, they are not in a position to buy the commodity.

They told The Gleaner that even though it poses a risk, they are willing to take the chance to ensure that they can iron their clothes, watch the news on TV, and preserve foodstuff in their refrigerator.

Meanwhile, some residents in the St John’s Road community of Spanish Town, St Catherine, said that the JPS should find a way to supply paying customers when they take measures to restrict illegal connections.

They told The Gleaner that they would be comfortable with a prepaid system.